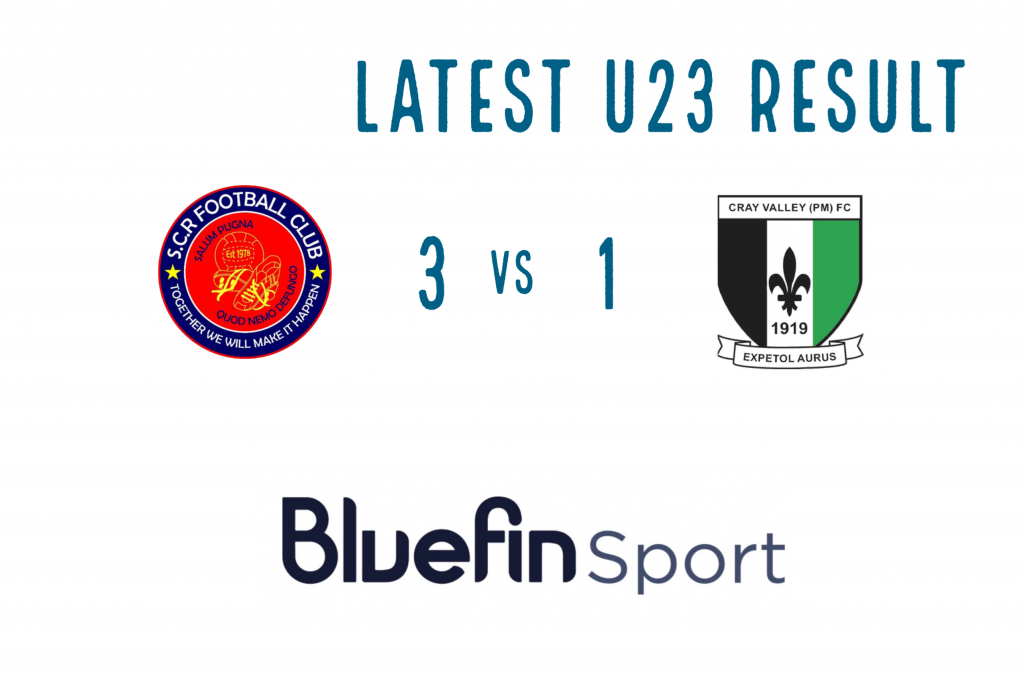 An excellent first 45 minutes was enough for the lads to take the game away from the Cray Valley PM. Liam Joyce handed a league debut to 16 year old goalkeeper Callum Thompson, in for the injured Jack Casey, and there was a return to action after a long period on the sidelines for speedster Ollie Twum – and everybody at the club was thrilled to see him back, knowing how important a cog he is in Darren’s Isthmian plans.

We started fairly brightly, and took the lead on 15 minutes, after a superb crossfield ball found Twum, he cut inside his marker and rifled an effort into the top left corner to put us ahead.

Cray Valley were dangerous going forward, with their excellent movement and pace, and we had a lucky escape midway through the half. Charlie Smeeth had already planted a header just wide, before Rodney Eurator got beyond the backline, chipped Thompson, but the keeper did just enough to get a hand on the ball, allowing Isaiah Wilson to get back and hook the ball clear.

Thirty minutes in and it was 2-0, as 23’s talisman George Baker fired home low from the edge of the area, for his first goal of the season. Minutes later and he had his second. Quick feet and a blistering turn of pace by Twum saw him get beyond the defender and his low cross was turned home by Baker from close range.

Both sides went close towards the end of the half, Jake Parrott hitting the bar for Cray and Baker bringing a good save out of the keeper, but we went in at the break 3-0 to the good.

As expected Cray came out strongly in the second half, looking to get back into the game, but we held firm, until 15 minutes from time Ryan Penton reduced the arrears, and the same player went close five minutes later, this time bringing a good save out of Thompson.

Both sides ended with 10 men, after things got heated in the dying minutes, with Davis Nzeribe seeing red for us, but we held on to secure our first three points of the season.

Finally the U23’s have joined the U18’s in playing out of Sutton Arena. It might not be perfect, and it might not be fully up to speed just yet, but it is brilliant to see two of our sides playing out of a ground, that at some stage in the next few years we will be able to call our own. It’s been a long journey to get to this stage, and with the help of Sutton Council, and the hard work of the Salmons we are close to achieving our long term aims.