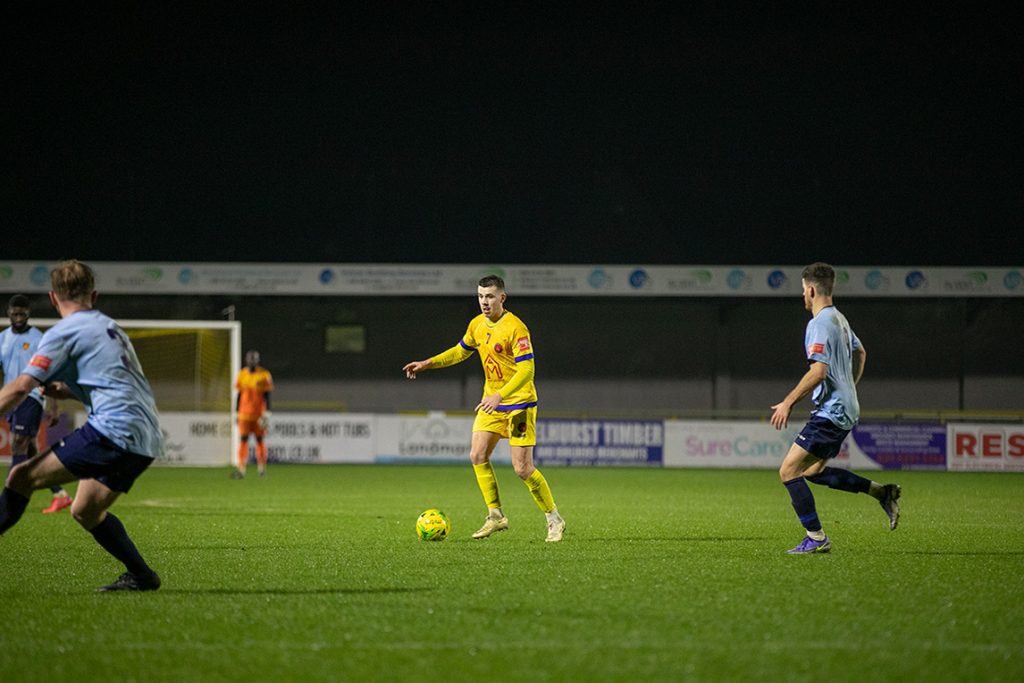 Rovers are still waiting for their first points, and indeed first goal of 2022, after defeat against a play-off bound Uxbridge on Wednesday night.

Darren Salmon made four changes from the side that lost at Chertsey Town, with Sheikh Ceesay replacing the injured James Dillon in goal, Germaine Dua, Shawn Lyle and Brendan Murphy-McVey came into the line up, with Ahn-War Tran-West dropping to the bench, with Aaron Goode and Marlon Pinder on the bench.

The visitors were out of the traps brightly, forcing a succession of early corners which came to nothing. The first shot in anger came on six minutes when the prolific Anthony Mendy fired an effort over Ceesay’s crossbar, Alex Witham and Anthony Mendy then linked up well only for an excellent Dua tackle to clear the danger. Mendy then saw a low effort gathered by Ceesay as Uxbridge continued to dominate.

Twenty minutes in and Uxbridge deservedly hit the front, and it was a disappointing goal from a Rovers perspective. Poor decision making by several players ended with a deep cross to the back stick not being dealt with, and as the ball dropped down it Mahlondo Martin who hammered home to put Uxbridge ahead. More chances came for Uxbridge, Witham saw a shot blocked by Jake Hill, with Mendy putting the follow up wide.

Uxbridge increased their lead on the half hour, this time Ryan Haugh climbed highest at the back post to plant a header firmly beyond Ceesay for 2-0. Almost immediately another corner and another free header saw Matt Tanton forced into a goalline clearance. We had first real spell of any pressure ten minutes before the break, Will Efambe almost capitalised on some over playing at the back by Haugh and Baboucarr Jarra but Uxbridge got bodies around the ball and were able to clear.

Half time came with Uxbridge holding a comfortable 2-0 lead.

Rovers made a change at the break with U23’s defender Boue Goredji replacing Aaron Bogle, who had moved level with Richie Smith on 258 appearances last night (our joint second most played player). In fairness Rovers started the half quite brightly, having a reasonable amount of pressure in the Uxbridge final third, but never finding that final ball that would test the underworked Tyler Tobin. Rovers continued to have the better of things, Shawn Lyle saw an effort well blocked by Haugh, and from a half cleared corner Efambe curled wide.

Uxbridge should have increased their lead on the hour, once again Rovers were guilty of overplaying and their opponents almost took full advantage. Prince Ogunmekan won possession and played in Martin, but a combination of Ceesay and Tanton saw the ball forced behind for a corner. Haugh saw his header from the corner gathered by Ceesay.

Rovers made their second change on the hour with Anh-War Tran-West replacing Brendan Murphy-McVey. It was 3-0 on 64 minutes. Rovers were putting Uxbridge under some pressure, but a lightning break by Martin saw him release Mendy, and although he looked to have lost the chance a clever backheel saw him notch his 21st of the season.

A low cross from the right was turned over his own bar by Haugh, and shortly after a low drive through a crowd by Ryan Healy bought an excellent low stop out of Tobin. Kiye Martin replaced Perri Iandolo with 15 minutes to go, and a minute later Healy saw another effort deflected behind for a corner.

Scoring was completed with just over ten minutes remaining. Goredji bought down Mendy on the edge of the area, earning himself a yellow card, and from the free-kick, also by Mendy, Ceesay made an excellent low stop but saw the loose ball turned home by Uxbridge substitute Ezra Ndukuba.

Rovers picked up a couple of late bookings, for Healy, and skipper Ryan Dacres-Smith, as Uxbridge saw out time with a comfortable 4-0 win.

For Rovers there were few positives to take from the game – yes the second half was marginally better than the first, but it couldn’t really have been worse, and the rarely tested Tobin. Another tough test awaits this weekend as play-off chasing Bedfont Sports are in town. 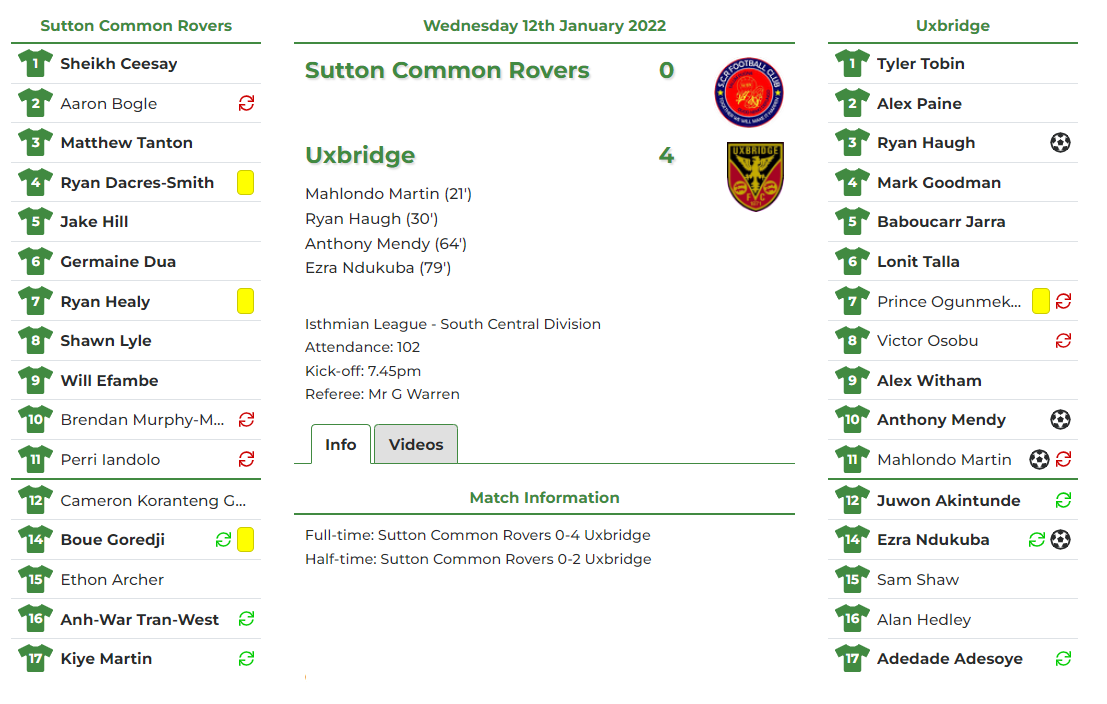