A HOME POINT AND GOAL 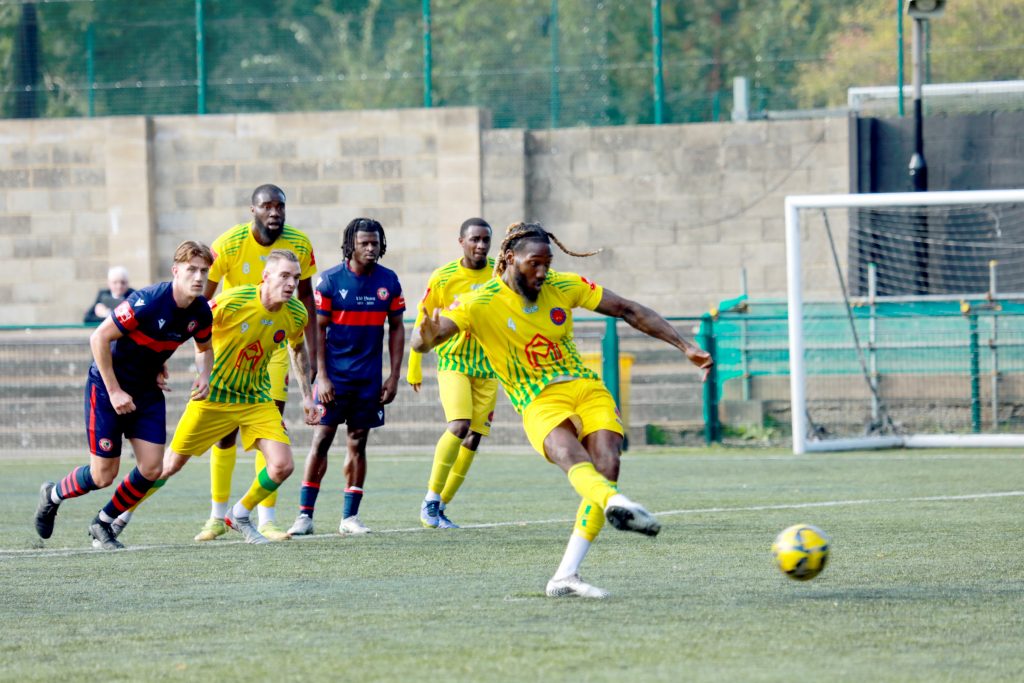 Rovers picked up their first home point of the season on Saturday when a Shawn Lyle penalty gave them a share of the spoils, in a dour contest, against Southall.

There were four changes to the starting line up from the side that narrowly lost away at Northwood. Skipper Rhamar Garrett-Douglas and midfielder Courtney Swaby both returned to the line up, with the returning Jephte Tanga and debutant Javin Dougan also in from the start. Matt Surmon and Geneiro Maragh dropped to the bench, Nebay Haile was unavailable through injury and Tyler Cox missed out completely.

Rovers started brightly and good work between Kevin Songolo and Dougan almost led to an early chance for Sway but he was unable to get a shot away. Joseph Otudeko split open our backline with a superb ball out to Leonard Farhall and his cross was turned behind by Bertie Lloyd, from the corner though Southall took the lead. The corner was only half cleared and as Southall played it back into the area Kevin Songolo was harshly adjuged to have handled the ball. The spot kick was despatched by Louis Stead beyond Dan Purdue for 1-0.

Lloyd put a header over the crossbar on 18 minutes, after rising highest to connect with a Swaby free kick and Purdue was out smartly a couple of minutes later to gather the ball at Anthony O’Connor’s feet. Sawby and Tanga linked up well midway through the half and a low fizzed Songolo effort was well gathered by Carey Bloedorn in the Southall goal. Fifteen minutes before the break and a decent flick on by Tony Halsey found Dougan, he linked up well with Swaby to set up a chance for Tanga, but his low drive was blocked by Carl Pearce.

The scores were level ten minutes before the break. Neat play on the right between Tanga and Swaby saw them create space and set the ball into box was heading for Songolo before he was felled by a Southall defender. Shawn Lyle stepped up to fire the spot kick home for 1-1. Rovers continued to press and almost took the lead straight away. A long ball forced Bloedorn off his line, and his half clearance only found Dougan but his drilled effort went wide of the left hand post.

Just before half time and Southall had a chance to retake the lead. Songolo lost possession in the middle of the park, Stead broke clear before being fouled by Lloyd. From the free kick Luke Heneghan could only find Purdue, and the sides went in level at the break.

If the first half had been exciting, what followed was the polar opposite as the good play from both sides went out of the window. Southall had the first chance of the half, a soft clearance by Diomande only found Heneghan, his shot was half saved by Purdue, with Jake Frailing seeing his follow up blocked. Diomande went into the book shortly after for a poor challenge on Otudeko.

Midway through the half, Tanga and Songolo linked up to force a corner which came to nothing, and it was Songolo’s last action as he made way for Matt Surmon. Farhall had a good chance to restore Southall’s lead twenty minutes from time, cutting inside Lloyd but only firing his effort straight at Purdue.

Subsitute Brian Testolin was denied by a brave challenge by Bloedorn, and at the other end a whipped in free kick by Stead saw Lyle head towards his own goal, forcing Purdue into an excellent stop away to his right. With just over ten minutes to go Rhamar Garrett-Douglas fired a shot wide of the left hand post.

Tanga almost broke clear on 85 minutes, but was hauled down by Alex Nolan just outside the area, the free kick though was poor and straight into the Southall wall. Bloedorn gathered a Lloyd flick header in the 89th minute but it was Southall who almost snatched a last gasp winner, with O’Connor seeing his strike superbly blocked by Hugo Odogwu-Atkinson. A minute later and a header by Frankie Taylor was blocked by Lyle and that was pretty much the final action.

Full time came with the sides sharing the points.