ALLEN AND GOODE HAUNT THE ROVERS 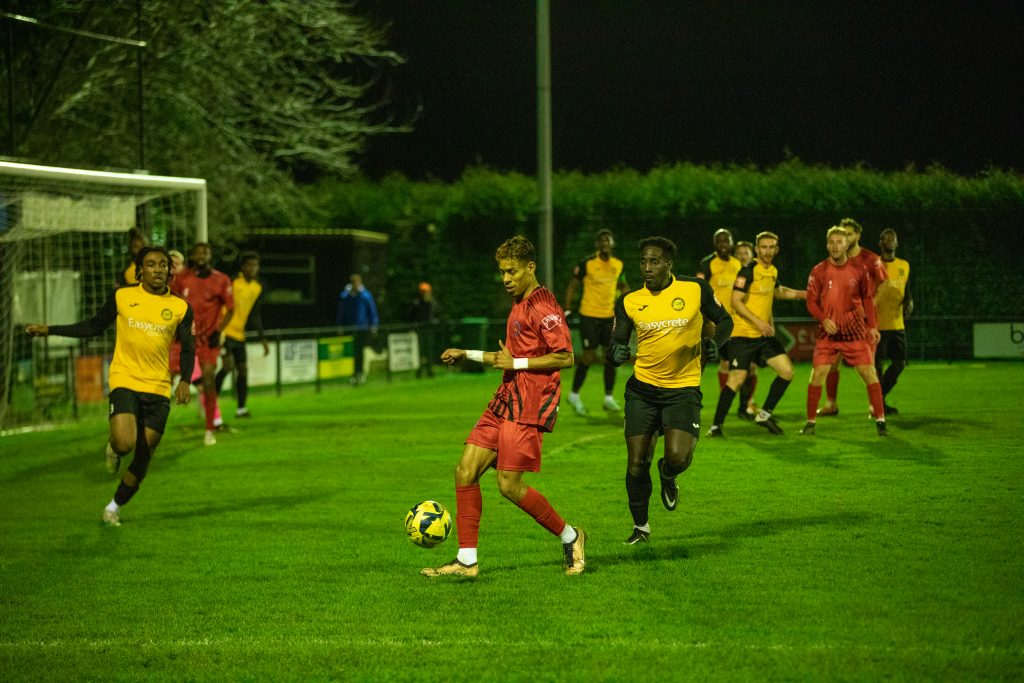 In fairness, despite the two league positions, an in-form Merstham would have gone into the game as clear favourites against an out of sorts Rovers.

Merstham started brightly and Brian Zepo fired an effort over the Rovers bar in the opening stages. Rovers grew into the game and a cross shot by Tyler Cox failed to trouble Filip Chalupniczak in the Merstham goal, before Zaid Ouaret Sorr saw his effort well gathered by the keeper.

Endurance Johnson saved well from Adam Adam midway through the half, and at the other end a half chance for Tyrese Sutherland went wide of the Merstham right hand post.

The opening goal came on 32 minutes, and it was an old SCR fan favourite who struck the blow. A shot from distance by Luke Read was only partly saved by Endurance Johnson, and Adam Allen was on hand to fire home the loose ball for 1-0.

Shortly after and it should have been 2-0, Johnson was left grasping at thin air at a cross and with the goal gaping, Zepo somehow failed to hit the target and Rovers survived. A swift break down the right as the half drew to a close saw Roman Charles-Cook fire an effort across the face of goal by Allen was unable to keep his effort down.

A hammer blow for Rovers came in first half stoppage time, and it was another ex-SCR player who did the damage. A free kick on the right was swung over to the back post and an unmarked Aaron Goode was left with an unmissable chance.

Rovers improved slightly in the second half and looked like to get back into the game. Malachi Robinson and Ouaret Sorr linked up and a decent delivery into the area was just beyond Daryl Cooper-Smith, and minutes later an underhit backpass by Read left Chalupniczak in trouble but the keeper just beat Cooper-Smith to the ball and cleared the danger.

Playing down the slight slope, the Merstham pace was a constant problem for Rovers, and Adam almost reached a ball over the top, although the challenge on Johnson left a lot to be desired.

Ten minutes in and a fierce Ouaret Sorr drive was saved by Filip Chalupniczak and with the goal gaping Daryl Cooper-Smith was denied by a superb recovery save by the keeper.

A mistake by Liam Holden almost let in Merstham but the experienced defender was able to recover and clear the danger and from the break, Robinson found Cox and his eventual shot was deflected behind for a corner, which came to nothing.

Rovers were having much the better of things, but with ten minutes remaining Adam Adam sealed the win for the hosts, cutting inside from the right, he curled a delightful effort beyond Johnson for 3-0.

There were no further chances and Rovers slumped to a ninth straight league defeat.