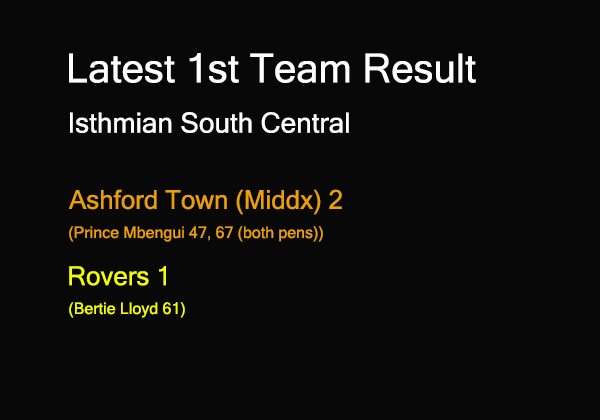 Cold, damp and sticky conditions for a second consecutive away fixture in a ground with a Twickenham post code, both falling on the same day as an England Rugby International. With the stadium just a few miles away, and the A316 at a standstill, the journey here was not the route planned!

Ashford start on the front foot, pressing at pace, with an early onslaught from Clyde Ondo, Chad Goulter, Lindell Stewart and Luke Maguire. Awkward for Rovers, but Courtney Swaby’s block gives him the chance for a blistering run toward the Ashford penalty area, only to be brought down for a free kick. Facing a four-man wall Shawn Lyle places the kick just to the left of the post. An early chance almost going Rovers’ way, turning over a dangerous Ashford move.

A series for infringements just inside the Ashford half sees Swaby take a succession of free kicks, lofting the ball into the Ashford penalty area each time, but to no avail. Luke Maguire picks up a loose ball from one attempt, and has a free run into Rovers’ half, only to be denied by Matt Surmon with a great block.

A quick throw-in by Diomande reaches Tyler Cox who neatly flicks the ball over the Ashford defence, but a shade to close to the keeper, Fred Chapman, who safely gathers. His distribution creates a chance for good work from Stewart and Ondo on the overlap, but the cross was not up to it. Easy for Johnson

On 20minutes, a foul on Lee Flavin gives Rovers an opportunity – the kick taken quickly by Flavin to allow Swaby to gain ground down our left, playing in Cox, whose sumptuous cross is ably defended by Ashford, but results in a corner to Rovers. Swaby takes, again headed out by the Ashford defence giving Danyaal Iqbal opportunity to break, but the ever-reliable Bertie Lloyd intercepts to deny a nailed-on opportunity.

The game is not without endeavour and enterprise from Rovers, plenty of chances with good approach work, but with no end product as yet.

Shawn Lyle takes on three Ashford players and squeezes past drawing a foul on the edge of the box. Swaby takes, but too close to Chapman. The keeper’s throw puts Ashford on the break, which culminates in a succession of corners, taken by Danyaal Iqbal. Shawn Lyle manages to head clear setting Tyrese Southland off on the right, beating two players, but his shot is blocked and then pin-balls in and around the area, with multiple attempts from Rovers. The ball finally bobbles out to Surmon, but his shot goes wide.

Rhamar Garrett-Douglas cleverly avoids a sliding tackle, presses on the right and clips the ball into the Ashford box, picked up by Swaby who plays in Surmon, who then pushes the ball back out to the right, where Sutherland teed up his shot just over the bar. A great move from Rovers, the closest we’ve come so far.

Continued pressure from Rovers around the 40minute mark, with great combination between Sutherland, Flavin and Garrett-Douglas, Flavin setting up Sutherland for a shot, again just over the bar.

A short quick corner from Ashford, floated in the box and picked out of the air by Johnson, who rolls out to Zak Brown delivering a great ball to Swaby, who passes inside to Surmon, the shot failing to trouble their keeper.

At the half-time whistle, the score still dead-locked at 0-0, but both sides having equal opportunity to go ahead. The slippery surface caused a number of players to lose their footing, but on the whole have managed to cope with the conditions.

The second half Ashford kicked off with real intent, the ball immediately launched into Rovers’ penalty area. Lloyd poised to head clear, but Johnson shouts and our central defender leaves the ball for his keeper to claim. With the ball a little too far from reach, the incoming challenge from Ashford’s Maguire clashes mid-air with Johnson. Only one outcome – a penalty to Ashford and a yellow card for Johnson. Prince Mbengui steps up to convert for 1-0.

On 60minutes a Swaby free-kick lofted into the Ashford penalty area fell nicely for Diomande, who was only able to smash his shot into the legs of defenders crowding the box. Another chance not converted. Shortly afterward an Ashford free kick from 30yards out, sees Chad Goulter curl the ball round the Rovers’ wall and was claimed well by Johnson. His clearance was scrambled away, but only as far as Garrett-Douglas, his cross found Shawn Lyle, his shot deflected behind for a corner. Taken by Swaby, a great delivery curled in toward Ashford’s near post, causing Chapman to parry the ball straight to Lloyd, whose fast reaction slotted the ball home from waist height. All square at the Robert Parker Stadium.

With the goal, Rovers up their game, with good work from Sutherland on our right hand side, finds Cox in the penalty area, who loses his man to the right and shoots on the turn, forcing a fine save from Chapman.
Substitutions at 64minutes, Flavin makes way for Kyron Richards, while Ashford’s Tomasz Siemienczuk is replaced by Daniel Brown.

67minutes now, and great work from Iqbal on Ashford’s right, passed out to Brown, the cross into the box inviting a foul by Diomande, albeit the merest of touches, gifting Ashford’s 2nd penalty. Again, Mbengui steps up to convert high to Johnson’s left for 2-1.

A quick free kick from Lloyd sends Diomande down our right, his shot turned round the post by Chapman. Swaby sends in a high corner swinging dangerously under the bar, but Chapman was equal to it and managed to keep it out.
After a substitution for Ashford, Wayne Ridgley replacing Iqbal at 70minutes, the following period saw many surges forward by Rovers, with good link up play between Garrett-Douglas, Cox and Swaby. The desire to pull level was there, but the finishing was not.

Things were getting a bit fraught for Rovers at this point, with a great deal of frustration creeping into our game. A yellow card for Garrett-Douglas on 84minutes for expressing his feelings a little too vehemently.

A late scare from Ashford, as Ridgley and Matthew Kellet-Smith link up on the right, the cross floated over to Daniel Brown, who headed over Johnson against the post. A yellow card was then issued to Ridgley for bringing down Gerrett-Douglas. From Swaby’s clever free kick, short to Liam Holden, giving him time to float the ball beautifully over the defence onto Cox’s right foot, who swept it across the goal, just brushing the post – on any other day that would have counted.

The closing minutes were typical of a team holding onto a lead, and one chasing the game. A yellow card for Diomande for a rash challenge, and one for Daniel Brown for kicking to ball away.

On reflection there was some good football at either end in this game, but too many squandered chances for Rovers.