CUP GLORY FOR THE FIRST TEAM 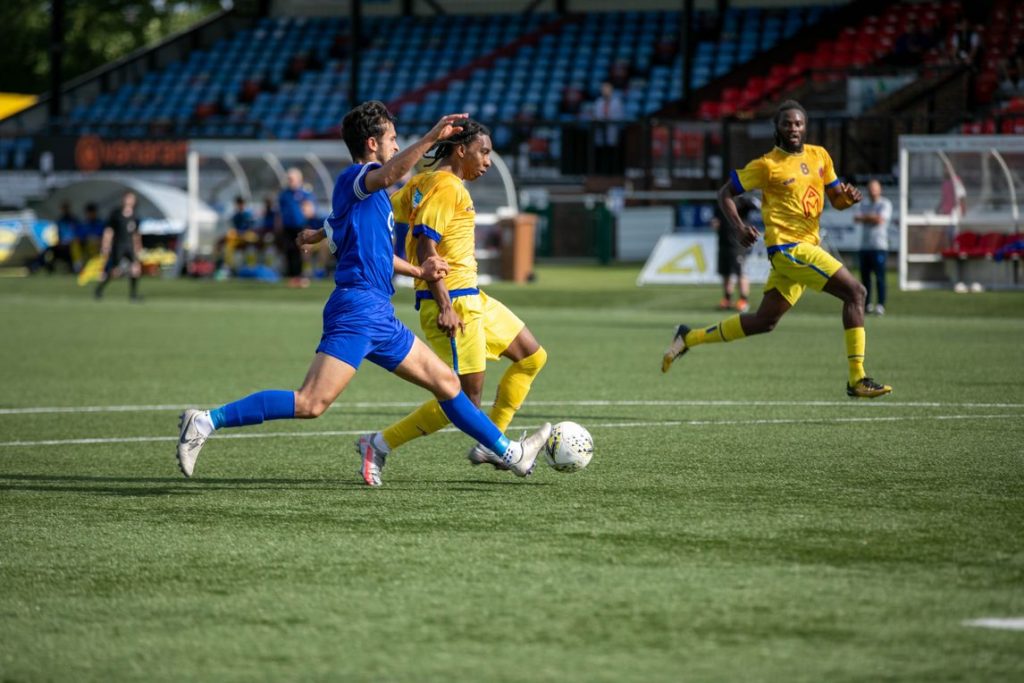 Rovers eased into the First Qualifying Round for the second time in their history with an ultimately comfortable win over Broadfields Utd.
A bright start saw Kiyo Brown, Malachi Robinson and Danny Fernandez link up, and from the low Fernandez cross Adam Allen was just unable to turn the loose ball home.

Rovers took the lead on four minutes. Teenager Brown, enjoying his best game for the club, drifted passed a couple of Broadfields defenders and played in Kyle Henry, who hit an unstoppable shot beyond Matt Faley and into the net. Brown was denied by a superb challenge by Ryan Wharton as Rovers were threatening to run riot.

Broadfields though were showing enough when they got the ball to suggest that Rovers wouldn’t have things all their own way, and a strong run by Jamal Mattan was ended by a combination of Nathan Ayling and Aaron Goode. Fernandez has an effort brilliantly blocked by Wharton, and it was 2-0 on 19 minutes. This time Henry turned provider, playing in Brown, and he calmly slotted under Faley, as the referee waved away Broadfields protests of offside (from my position behind the goal, I honestly couldn’t tell).

Broadfields responded positively, and good work between Mattan and Billy Smith ended with a deep cross by Smith, being well defended at the back post, as Damion Cruickshank thundered in for a header. The visitors were forced into a change on the half hour when Cruickshank made way for Nate Lewis-Robinson. Shortly after and good work on the left by Ollie Twum saw him find Fernandez and his low shot was well saved by Faley.

Marley Anderson-Richards and Mattan then linked up to find Smith, but he was denied a chance by Goode. Lewis-Robinson then beat several challenges and poked an effort goalwards, as Broadfields enjoyed their best spell of the game. It was effectively game over on 42 minutes though, a ball over the top was being seen out by Steven Benavides, but Brown refused to let the ball go dead, picked the defenders pocket and found Fernandez, he crashed a shot against the bar and Twum headed home the loose ball to give Rovers a 3-0 lead at the break.

Rovers made a change at the break, replacing Twum with another youngster in Bradley Williams. Broadfields knew they needed an early goal to get themselves back into the contest, and a ball over the top five minutes into the half found Smith, but Aaron Bogle did superbly to clear the ball out for a corner.

Just before the hour and Ayling made way for Jay Dunstan-Digweed, and shortly after Mattan made way for Luke Nugent for Broadfields. Dunstan-Digweed and Bogle combined to prevent the visitors from pulling a goal back after a scramble in the Rovers area. With 25 minutes to go it was 4-0, Ryan Dacres-Smith collected the ball midway inside the Broadfields half and found Fernandez and he unleashed a screamer from 25 yards, into the top right corner, leaving Faley with no chance.

Shawn Lyle replaced Henry as Rovers made their final change. Shawn Richards was denied by a strong Goode challenge as we moved into the final ten minutes, and at the other end Lyle shrugged off two challenges but saw his effort go just wide of the left hand post.

Richards fired a free kick over the bar as Broadfields were denied a consolation goal, and the last significant action saw Lyle hobble off, and end up in A&E.