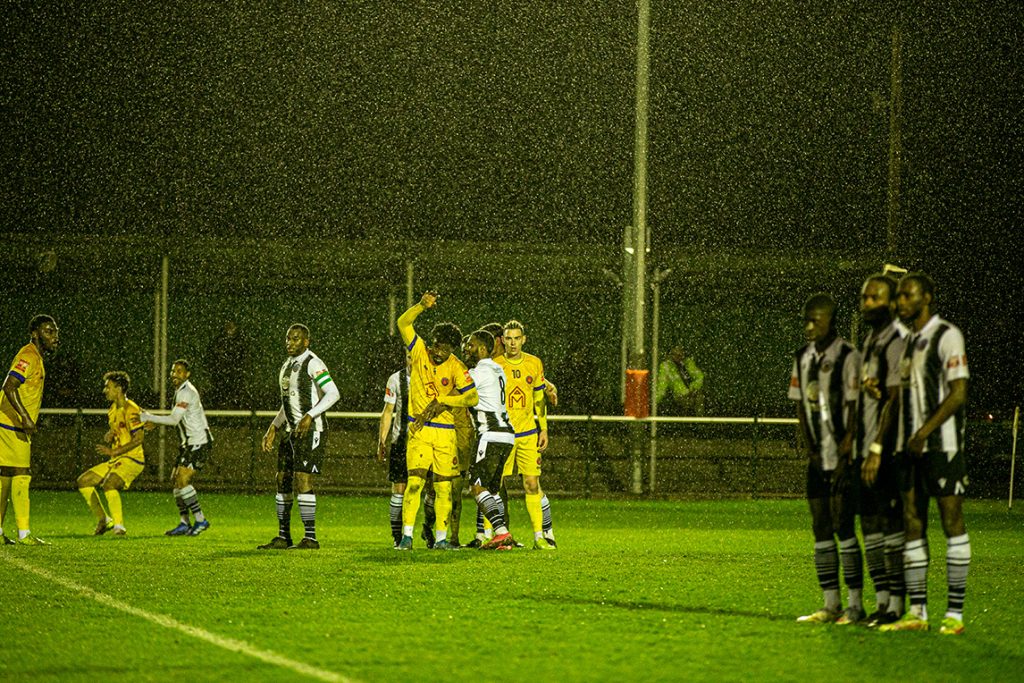 Four minutes of second half madness plunged Rovers further into the relegation dogfight, as they saw opponents Tooting & Mitcham Utd leapfrog them in the table courtesy of a 2-0 win at Fetcham Grove.

Darren Salmon made three changes from the side that had lost at Westfield, James Dillon replaced Filip Chalupniczak in goal, and their were first league starts for Mo Amghar and Tobe Uzor, in for the unavailable Germaine Dua and injured Shawn Lyle.

Tooting started the brighter of the two sides and a loopy cross by Shamal Edwards was gathered by Dillon under his crossbar. Our first chance came on four minutes, when a Dillon clearance was flicked on by Tony Halsey, with Christophe Aziamale firing high over the crossbar. Cory Walters-Wright set Mark Waters away on ten minutes and as Jordan Clarke fired goalwards Matt Tanton was on hand to block the shot.

Rovers went close on 18 minutes, a long through by Halsey was flicked on by Amghar and as the ball dropped, limbs from both sides were heavily involved in trying to either force the ball home or away, and eventually keeper Ollie Pain fell on the ball to the relief of the Tooting faithful.

Aziamale had a shot deflected behind for a corner on 20 minutes, and from the corner Rovers thought they had taken the lead. A ball into the box saw Rovers bundle the ball home, only for a foul to be awarded (frustratingly listening to some Tooting players after the game and they had no idea what the foul was for). On the half hour Dontai Stewart’s cross to the back post saw a half clearance reach Edwards but he fired high over the crossbar.

Enoch Ako-Adjei then surged through several challenges before being bought down on the edge of the area by Perri Iandolo. From the free kick Dillon gathered at the back post. Uzor headed an Iandolo free kick over the crossbar on 42 minutes, and half time came with the sides locked at 0-0.

David Manu and Samuel Faniyan found their way into the book early in the second half following a spell of handbags inside the Rovers area. The game then swung dramatically in Tooting’s favour on 58 minutes.

Ryan Healy, under no pressure, tried to find Ryan Dacres-Smith but his pass was underhit allowing Edwards to nip in and gain possession. Healy slipped as he tried to rectify the situation and Edwards calmly rolled the ball under Dillon for 1-0.

The Terrors were in dreamland four minutes later. A quick free kick found Edwards and he skipped beyond Dacres-Smith before delivering a superb cross to the back stick where Faniyan powerfully headed the ball beyond Dillon for 2-0.

Rovers were seemingly unable to respond, through balls were often misplaced, and despite an anticpated bombardment keeper Pain was relatively untroubled throughout the half.

In fact it was Tooting who went close to increasing their lead on several ocsions. Nathan Gordon saw a free kick well saved by Dillon away to his left, and the keeper did well to get off his line quickly and deny Ako-Adjei.

In stoppage time Uzor blotted his copybook when scything down Bade Ndiaye who had skipped passed several tackles, and Faniyan saw his low strike bring another top save out of Dillon low down to his left.

For Tooting the win pulls them away from the dropzone, whilst leaving Rovers firmly up against it. 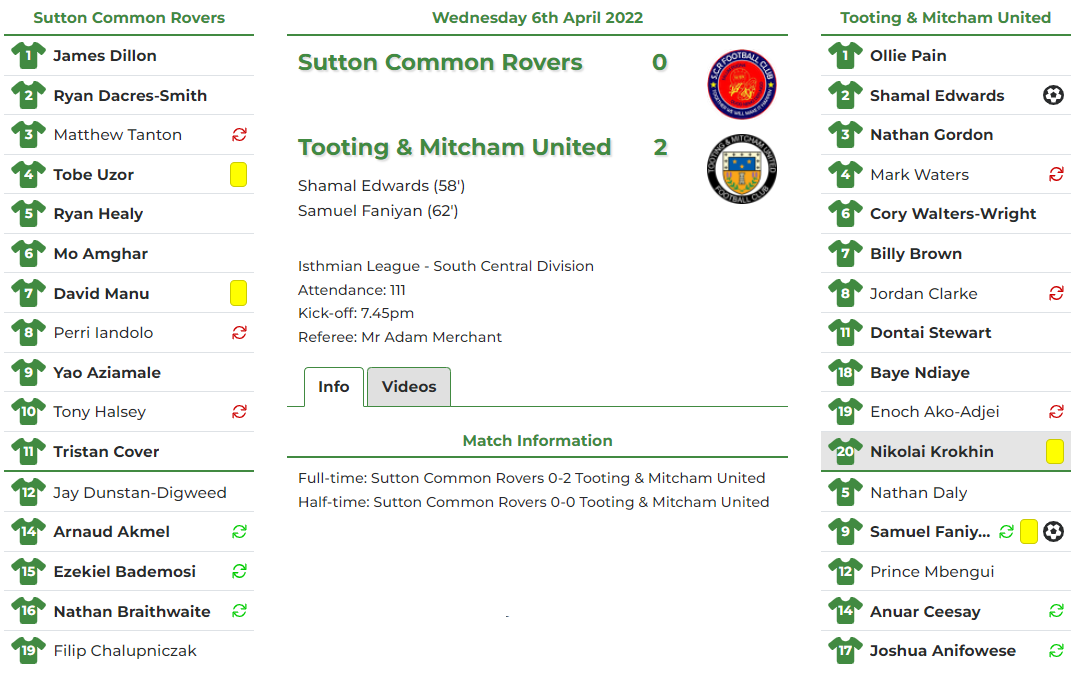