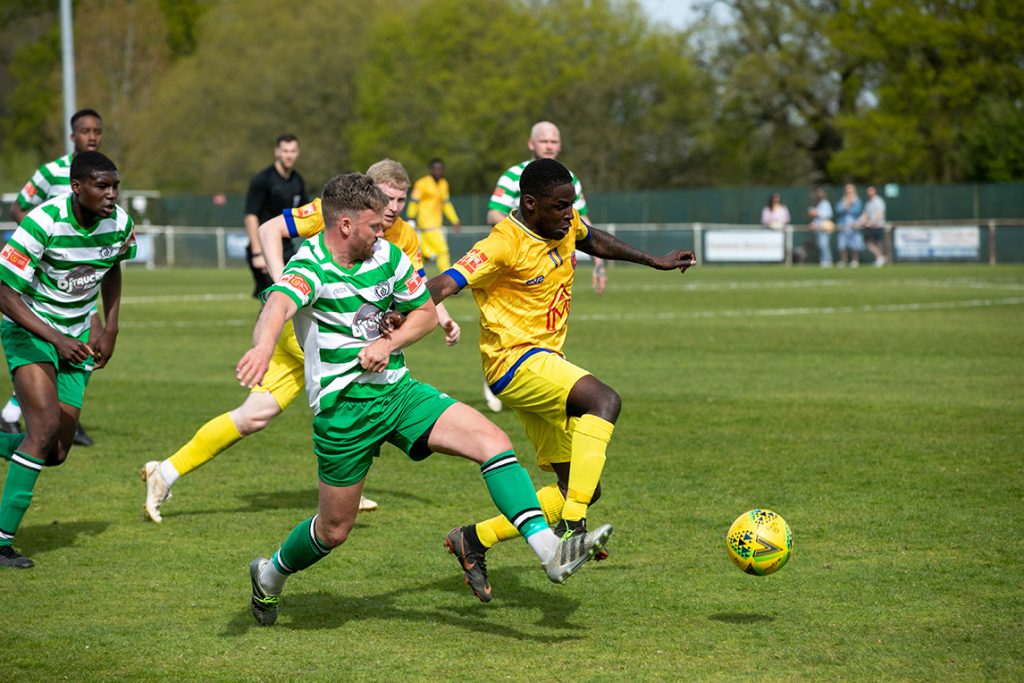 A Tony Halsey strike ten minutes from time helped secure Rovers their first point in April, as they picked up a 1-1 draw away at in-form Chipstead.

Darren Salmon rang the changes again, with first Isthmian starts for Ryan Stedman-Hoyte, Jamal Brimah and George Baker, plus recalls for Anh-War Tran-West and Arnaud Akmel. Chipstead made the brighter start, and had the first chance on five minutes, but Daryl Coleman’s effort was wild and screwed off for a throw in. Minutes later and a header by Kabuikusomo found Tom Smith but his effort flew over the bar.

Rovers gradually started to get a foothold in the game, and on ten minutes link up between Akmel and Baker ended with Baker stretching for a volley which just cleared the crossbar. Sam Bell saw a cross shot deflected behind by Tristan Cover and from the cleared corner, Peter Wedgeworth fired an effort from distance over the crossbar.

Midway through the half and Tran-West fired an effort high over the Chipstead crossbar, and back at the other end a dangerous cross by Wedgeworth was well gathered under the bar by Chalupniczak. Rovers finished the half strongly, Tony Halsey saw his poked effort saved by Matt Kerbey low down to his left and with two minutes to go to the break a ball over Jamal Abubakari found Baker, but he rushed his shot and fired over the bar.

A minute later and Baker was just unable to poke the ball beyond Kerbey, as he tussled with Abubakari and Alpha Barry Diallo for possession close to the Chipstead goal.

Chipstead started the second half brightly, and five minutes into the half a long ball caught out Stedman-Hoyte and Brimah allowing Kabuikusomo through on goal, but his was denied by a superb stop with his left foot by Chalupniczak and from the resulting corner Kieran Lavery hooked the ball high over the bar.

Baker made way for Christophe Aziamale on the hour, and almost immediately the substitute had a chance to open the scoring, released down the left by Tran-West, he cut inside but dragged his effort just wide of the left hand upright. Chalupniczak somehow avoided going into the book for a mistimed challenge on Kabuikusomo but from Wedgeworth’s free kick he redeemed himself with a good save low to his left, and Tobe Uzor was on hand to tidy up the loose ball.

All Rovers efforts looked to be in vain as the hosts opened the scoring on 76 minutes, a long ball forward was flicked into the path of Andy Kabuikusomo and he fired home low to Chaluniczak’s left. Clearly the celebrations in front of the Rovers bench riled the side, and the response was instant. Tran-West and Aziamale linked up just inside the Chipstead area and as the ball broke free, Halsey curled a delightful effort from just outside the box, beyond the despairing dive of Kerbey for 1-1.

Chipstead should have retaken the lead on 83 minutes, Laverey did well down the left and his low cross was destined for Kabuikusomo but he could only divert his effort wide of the Rovers right post. Chalupniczak saved well from Coleman’s free kick on 86 minutes, and Rovers had a glorious chance to win the game when Aziamale found himself well placed with only the keeper to beat, but the forward opted for a pass and the chance went begging.

Chipstead substitute Jack Beadle skied an effort over the bar in injury time, and that was that. 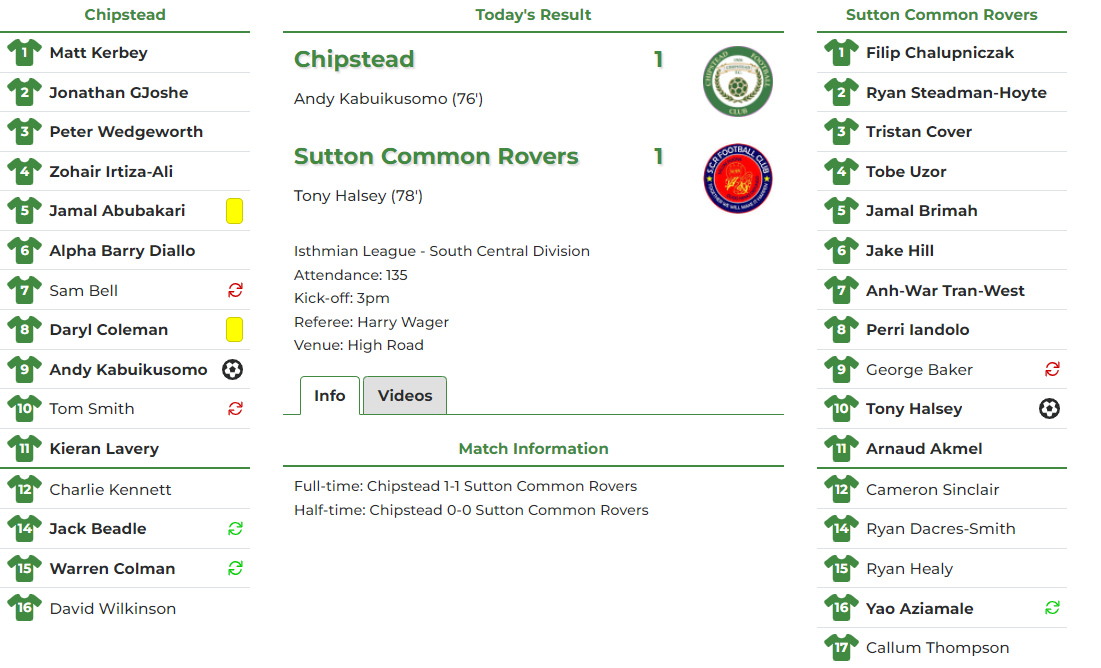