DUA STRIKES TO GIVE FIRSTS POINT

The first team picked up a vital point in their survival quest, when a Germaine Dua strike, with just over 15 minutes remaining gave them a share of the spoils against play off chasing Marlow.

Nnamdi Nwachuku fired wide for Marlow on eight minutes and the visitors made their bright start tell on nine minutes. Rovers conceded possession in the middle of the park and a neat ball by Devontae Romeo found Khalid Simmo who lobbed Dillon for 1-0.

Marlow had their tails up and almost immediately Bell did well to force a corner on the right, which Rovers eventually smuggled clear.

Rovers gradually started to get into the game and on 28 minutes a Perri Iandolo corner ended with a Shawn Lyle shot being deflected wide.

Marlow saw a corner scrambled behind by Rovers and from the next corner a header by Louis Rogers was cleared by the Rovers back line.

Half time came with Marlow a goal to the good.

Ten minutes into the second half and good work by Nwachuku on the left ended with his shot being well saved by Dillon, with Matt Tanton on hand to hook the loose ball off the line.

Rovers introduced Tony Halsey, newly signed from Chertsey Town, on the hour and midway through the half he was just unable to direct a Ryan Dacres-Smith cross on target.

The scores were level on 72 minutes, a long throw by Halsey was only half cleared by Marlow, and Dua curled home an exquisite finish from the edge of the area.

Rovers started to bombard the Marlow area, and a loopy Iandolo effort caused Grant a couple of nervy seconds. Will Efambe and Halsey then linked up to find Iandolo and his cross was met by Lyle but gathered comfortably by Grant.

Halsey headed an Iandolo corner wide on 80 minutes and with five to go, an Iandolo free kick was well claimed under his bar by Grant. Jephte Tanga was just unable to find Christoph Aziamale having been set free by Iandolo and the aerial threat from Halsey saw him put a header over the bar. 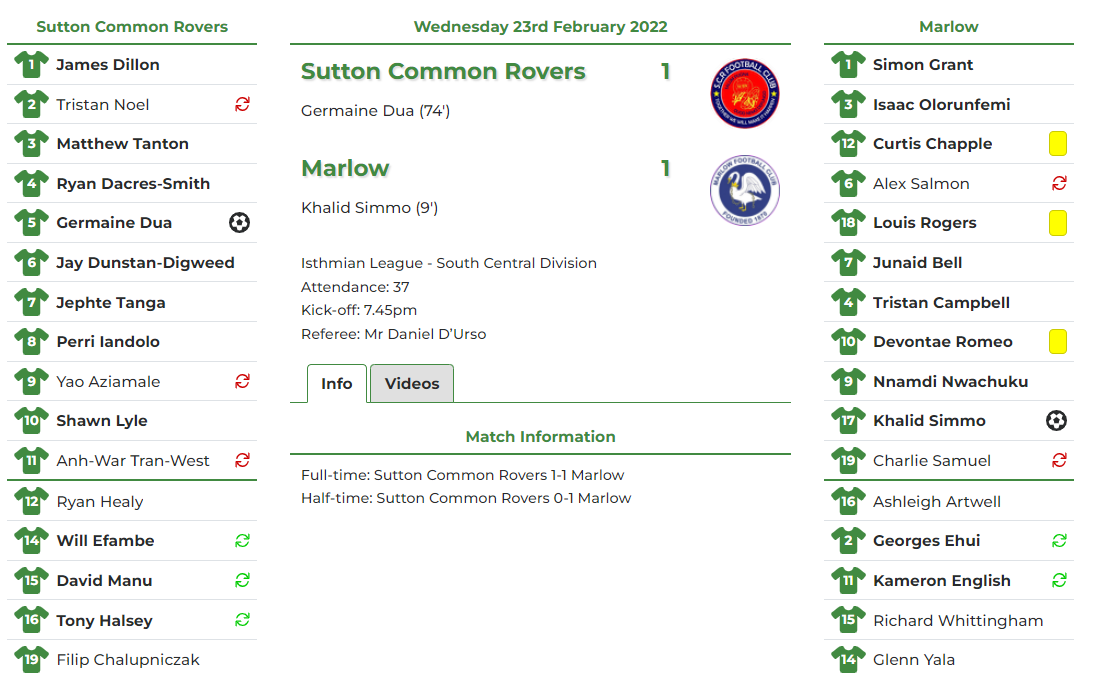