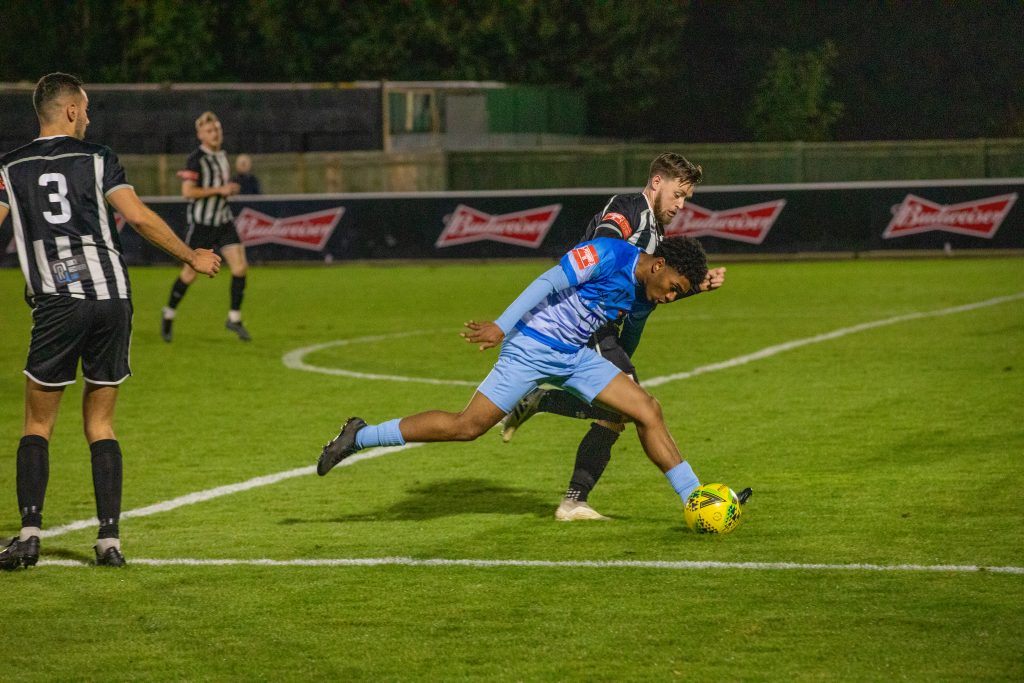 Indiscipline in the previous games saw Darren without five regulars, all suspended, and one player isolating, ahead of a trip to a highly rated Hanwell Town side. Mo Dabo, on debut, and Jake Hill replaced suspended full backs Malachi Robinson and Matt Tanton, whilst their was a first start of the season in the heart of the backline for Nathan Ayling. Ryan Healy was restored to midfield, after filling in at the back, in place of suspended skipper Ryan Dacres-Smith, with Ollie Twum in for Kyle Henry. Tyrell Butler led the line.

It was a fairly tight start to the game, with Hanwell having the better of the proceedings but our backline was holding firm. A couple of chances fizzed passed our goal, but it looked as though we had struck first, when Tyrell Butler flicked home a Kiyo Brown ball into the area, but the flag was raised and hopes dashed.

Brendan Murphy-McVey bought a good save out of Hugo Sobte with a cheeky chip midway through the half and that was probably as good as it got. Just before the half hour, Aaron Bogle gifted possession back to Hanwell and a neat move ended with Ogo Obi firing low through Mackenzie Foley for 1-0. Ten minutes later and it was 2-0 with Dwayne Duncan converting at the near post, and the hosts took a two goal advantage into the break.

Murphy-McVey went into the book five minutes into the second half for hauling back his opponent, and it was 3-0 on 54 minutes with a low strike by Jack Beadle finding its way into the bottom corner. We tried to freshen things up, Dejahrn Grant and Emmanual Tehe, on debut, entered the fray replacing Twum and Brown and it was from a great Grant run that Hanwell increased their lead.

Doing on well on the right Grant’s dangerous ball into the box eluded everybody and a lightning break saw Obi get beyond Hill and round Ayling before crashing the ball home for 4-0, and three minutes later Obi struck his third, capitalising on a loose ball.

With twenty minutes to go we introduced Aaron Hunt, another on for his debut and one of our former Colts players, for Murphy-McVey.

We picked up a consolation goal with time running out, another decent cross by Grant, who to be fair had a decent impact when he came on, being headed home by Butler.

On to Guernsey next week.