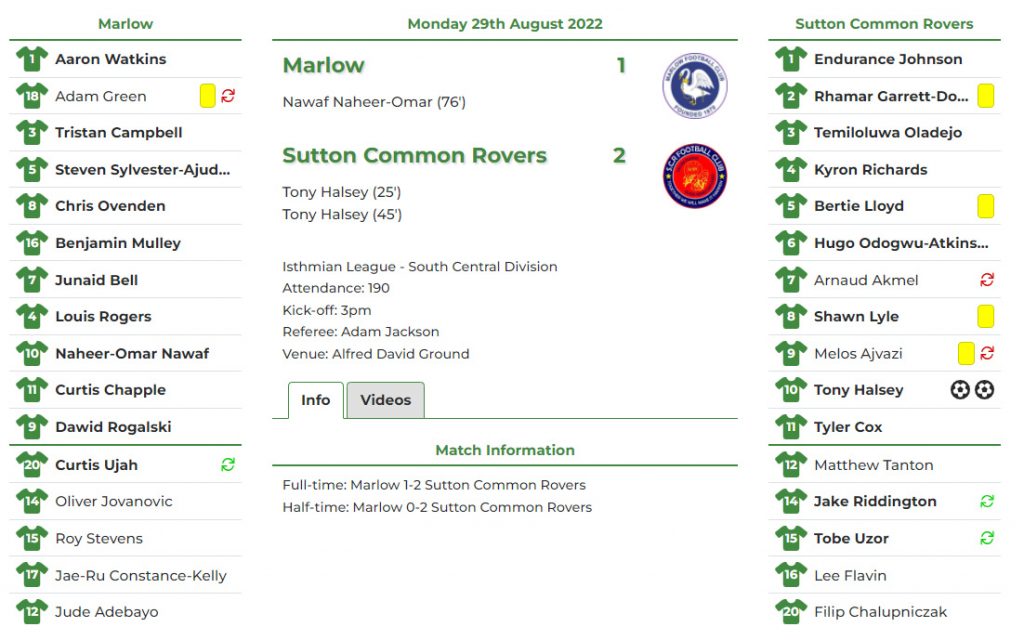 After the debacle of Saturday it was a performance of spirit and fight from Rovers when they travelled into the hostile atmosphere at Marlow on Bank Holiday Monday.

Marlow started brightly and forced some early corners but delivery was poor and they came to nothing. Dawid Rogalski headed wide on 12 minutes and shortly after he was guilty of putting a glorious chance wide as the hosts continued to hold the upper hand.

Our first chance in anger came midway through the half when a long Endurance Johnson clearance was flicked on by Tony Halsey and a shot fired high over the bar by Melos Ajvaji. Two minutes later and Rovers should have taken the lead, Arnaud Akmel found Halsey, he set up Tyler Cox who cut inside the full back but dragged his effort wide of the right hand post.

A minute later though and Rovers hit the front, Shawn Lyle fed the ball out to Akmel and his cross was superbly headed beyond Aaron Watkins by Halsey for 1-0.

Marlow upped the ante to get back into the game but despite a fair amount of pressure our backline was holding firm, with Bertie Lloyd and Hugo Odogwu-Atkinson in superb form.

Rovers struck again in first half stoppage time. Tristan Campbell was pulled up for handball, and from the Cox free-kick, Halsey dived to head home for 2-0.

Lloyd went into the book early in the second half following a foul on Rogalksi. Junaid Bell curled the resultant free kick over the bar. Adam Green then delivered a dangerous low cross and the stooping header by Rogalski went just wide of the left hand post.

It was almost 3-0 on 57 minutes, Kyron Richards whipped a ball into the area, Halsey set it back and Ajvaji saw his low strike cannon off the post and away to safety. Lyle went into the book on the hour for a foul. From the free kick, Bell again failed to trouble Johnson.

Marlow were back into the game on 76 minutes, Rovers failed to deal with a long throw into the area and a low drive by Naheer-Omar Nawaf gave Johnson no chance. Lloyd then made a superb block as Curtis Chapple looked poised to level the scores.

The home side were now launching wave after wave of attack and desperate defending blocked a low shot by Bell. In a rare break, Cox did superbly to beat several challenges before seeing his effort turned over the bar by Watkins.

Rovers were endebted to young keeper Johnson who first did remarkably well to stop a deflected effort by Rogalski, but the recovery to stop the second effort was unbelievable.

Jake Riddington replaced Akmel with five minutes remaining. We then conceded a free kick right on the edge of the area as time looked to run out but again Bell fired over the bar and a minute later a low drive by Bell struck the Rovers post.

Marlow thought the had a chance to level the game deep into stoppage time when Rogalski went down in the area, but to Rovers relief the referee waved play on and Rovers secured the three points. 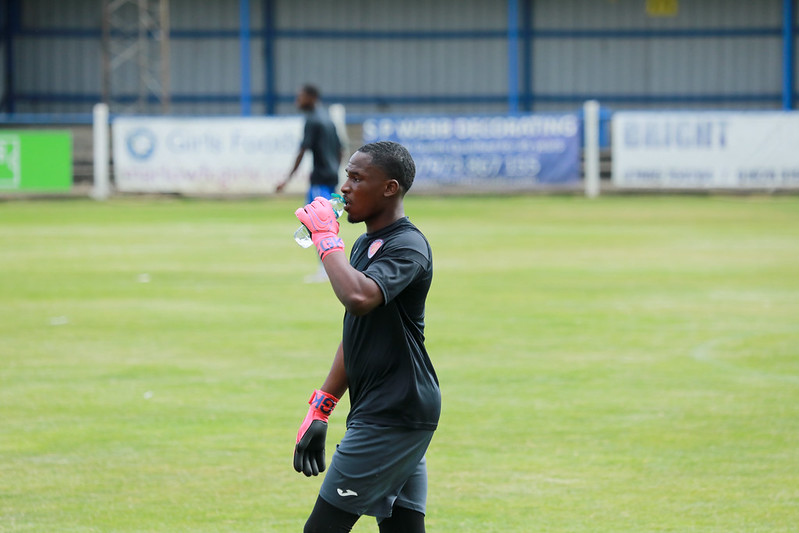