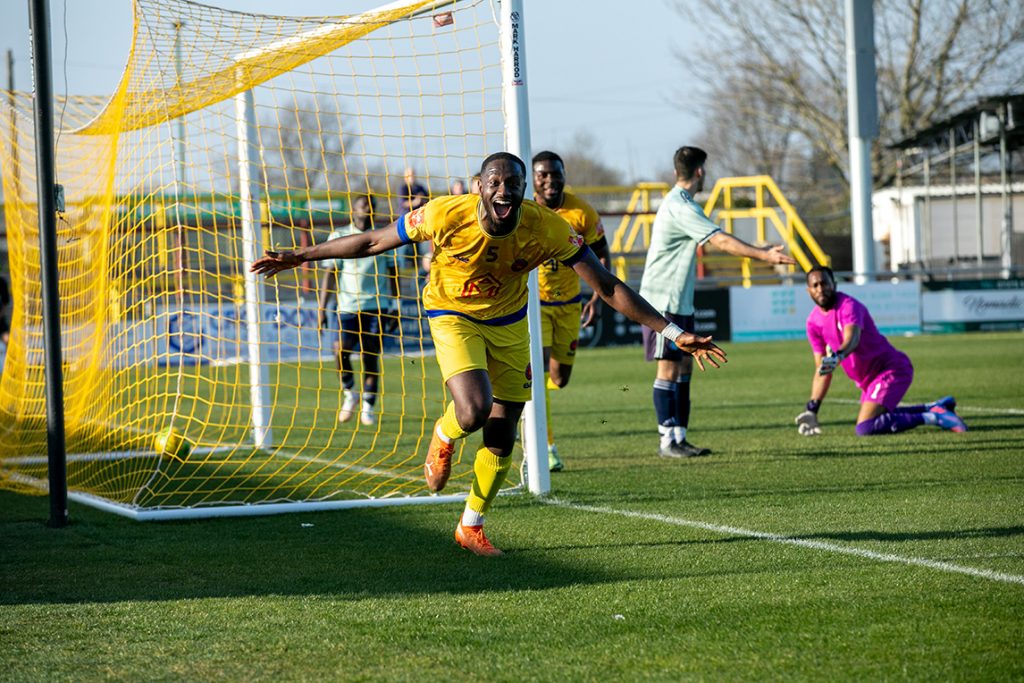 Rovers quest to survive the drop from the Isthmian South Central was boosted further when a five goal salvo saw them see off bottom placed Staines Town on Saturday.

Darren Salmon put out an unchanged side fro the previous weeks win over Basingstoke Town, with skipper Ryan Dacres-Smith back and in the squad.

First chance of the game came five minutes in when Ernest Murmylo saw his shot blocked by Rovers stznd-in skipper Ryan Healy. Our first chance came on nine minutes when a dinked Perri Iandolo cross caused problems for Luis Silva, but the flag went up for offside and the chance went begging. On the quarter hour Germaine Dua launched a close range effort high over the crossbar as Rovers started to exert some dominance , and Christophe Aziamale repeated the feat a minute later.

The game exploded into life on 20 minutes, when Tony Halsey was on hand to fire home a loose ball following a scramble in the Staines penalty area. A minute later and it was 2-0, this time Christophe Aziamale latched onto a misplaced pass by Derek Feyi, drove into the area and fired home low to Silva’s right. Incredibly Rovers were to increase their lead just a minute later, Aziamale chased a ball to the edge of the Staines area, Shayan Ghamarinezhad went to ground and the referee pointed to the spot, and put Ghamarinezhad into the book. Perri Iandolo stepped up and sent Silva the wrong way for 3-0.

Aziamale then bought a good stop out of Silva low down to his right. Rovers were now dominant, Aziamale and Tristan Cover linked up on the right, the ball was played into Halsey, his shot was half saved by Silva and Aziamale was just unable to force home the loose ball. Murmylo fired an effort high over the bar on 30 minutes as Staines had the best spell since the opening stages.

Silva did well to intercept a David Manu cross and from a quick break Brandon McCarthy’s cross found George Dewhurst but he could only direct his header wide of the left hand post, and half time came with Rovers holding a comfortable 3-0 lead.

Early in the second half and Staines had a great chance to reduce the arrears. Matt Tanton conceded a soft free kick just outside the Rovers area and from the low delivery into the box, Maciej Tajs turned the effort wide of the left hand post. Halsey bought a good save out of Silva on 55 minutes.

Manu had a shot saved on the hour and Rovers increased their lead on 67 minutes. Cover saw his free kick well saved by Silva, and from the resulting corner the ball found its way to Dua at the back post who converted with ease for 4-0, and a minute later it was 5-0, with Aziamale notching his second, firing home after the ball had come from off the Staines keeper.

Melvy N’Somi went into the book for a poor challenge on Aziamale. Bademosi and Adesoye Adedade linked up the right with Bademosi seeing his shot fly just wide of the left hand post. With time running out Tanton was booked for a foul on McCarthy.

Cover did superbly on the left, jinked passed a couple of defenders before crashing an effort against the crossbar, two minutes later and man of the match Iandolo tricked his way into the area, only to see his shot cannon off the crossbar as Rovers continued to dominate.

Full time came with Rovers recording their third win in March, and pulling themselves five points clear of the play-offs. 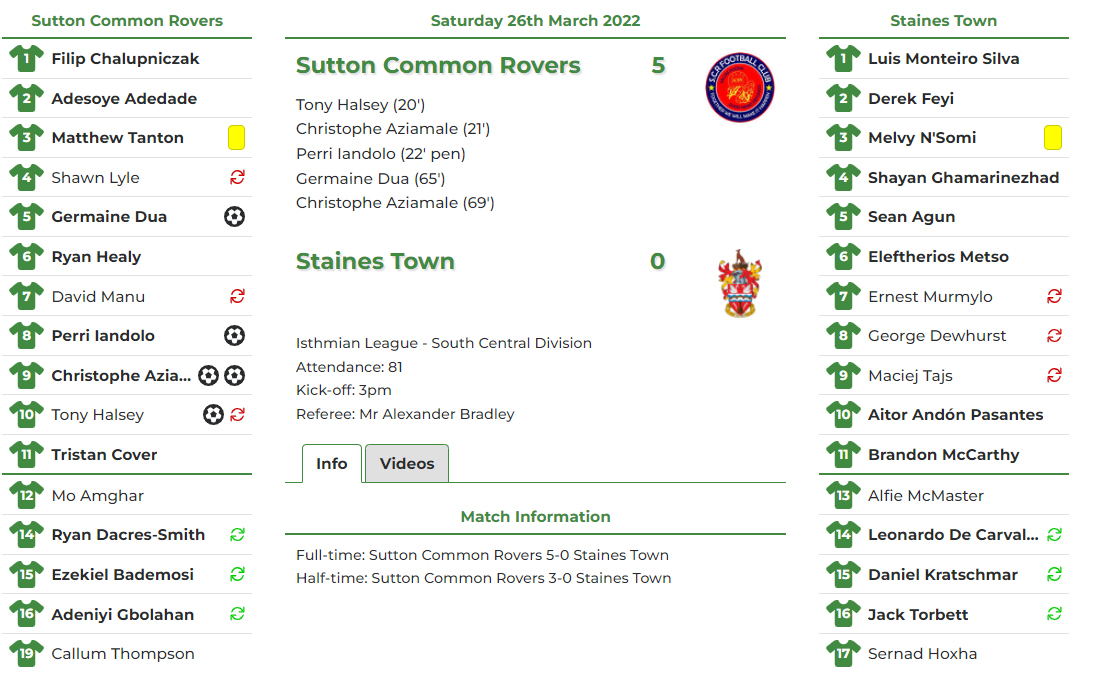