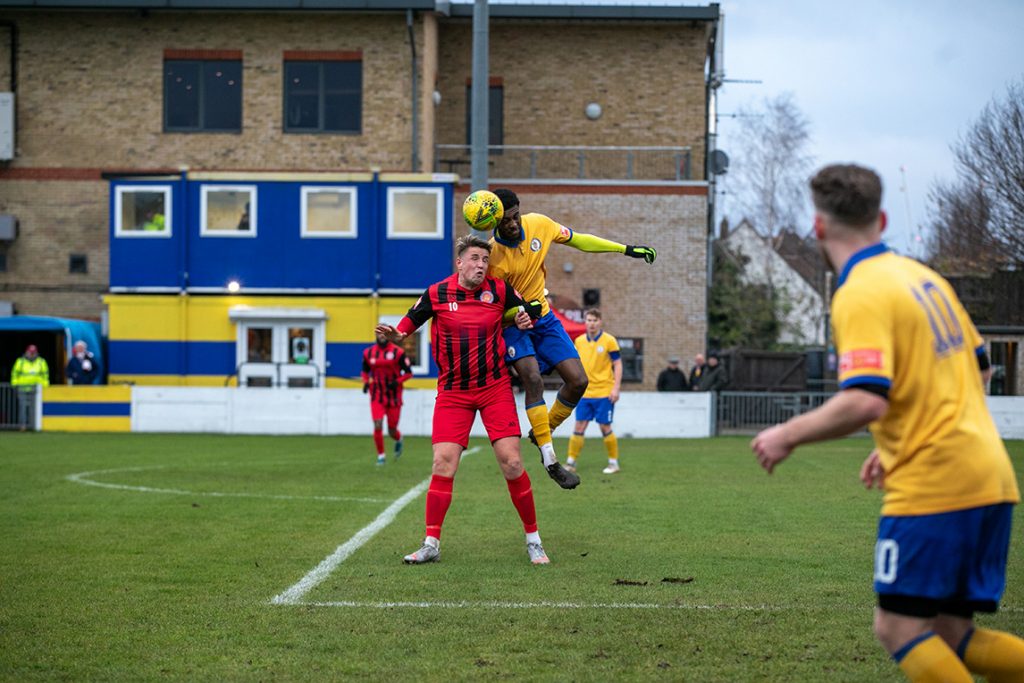 Rovers picked up a vital three points away at Staines Town when second half goal from Will Efambe and Anh-War Tran-West gave them a 2-0 win.

Making three enforced changes from the side that lost to Basingstoke Town, Darren Salmon handed a debut to experienced goalkeeper Sheikh Ceesay, whilst there were recalls for Mo Dabo and the fit again Niran Butler.

It was a scrappy opening to the game, with both sides struggling to keep possession on a sticky pitch and with a Gale swirling around Wheatsheaf Avenue.

Sixteen minutes in and a ball over the top looked to have set Staines’s Stan Anum away, only for Jay Dunstan-Digweed to prevent the player getting away and clear the danger (have to be honest, from my position at the other end I did fear the worst, so fairly relieved to see no foul given). A minute later and we gifted Staines possession and Anum looked poised to open the scoring but a mix of Ceesay and the back line saw the ball deflected behind for a corner.
tucker
Efambe saw a shot blocked on 23 minutes and five minutes later a poor clearance by keeper Tucker Quinn only found Malachi Robinson but the Rovers man could only guide his effort from 40 yards wide of the left hand post. French saw an effort blocked by Jordan Hector-Smith as we enjoyed our best spell of the half.

Ceesay was called into action again ten minutes before the break, getting down well to turn a Jack Tolbert shot away. Efambe headed over when well placed and then saw an effort rightly chalked out for offside shortly before the break.

Staines thought they had won a penalty right at the end of the half, when Connor McShane went down in the area but play continued and the sides went in level at the break.

Rovers started the second half brightly and could have been ahead inside two minutes, Matt Tanton and Efambe cut the Staines right flank to shreds, with Tanton being hauled down in the area, the referee played an advantage but Brendan Murphy-McVey somehow dragged his effort wide from eight yards.

The breakthrough came seconds later. Perri Iandolo picked up the ball in the middle of the park and released Efambe, he rounded the advancing keeper and rolled into the net despite the efforts of McShane, who was injured in the process and needed to be replaced.

Staines responded positively and Usman Lalustani got beyond Butler but was denied a chance by a tremendous challenge by Dabo. Midway through the half and Rovers thought they had extended their lead. Butler rose highest at a corner to head hone but was adjudged to have fouled a defender on his way up and the goal again was chalked off. Efambe dragged an effort wide for us and at the other end our defence was holding firm and Ceesay was relatively untroubled.

With just under five minutes remaining it was 2-0. Kiye Martin went down under a challenge in the area play continued momentarily and Efambe was also pulled down, this time a spot kick was awarded.

Skipper Ryan Dacres-Smith looked poised to take the kick but Tran-West took the ball off him and crashed home an unstoppable kick (think he can have more in future) to effectively seal the game.

Staines had the ball in the net late on, after the otherwise solid Ceesay had spilled a free kick but a linesman’s flag chalked that off and we secured a vital three points. 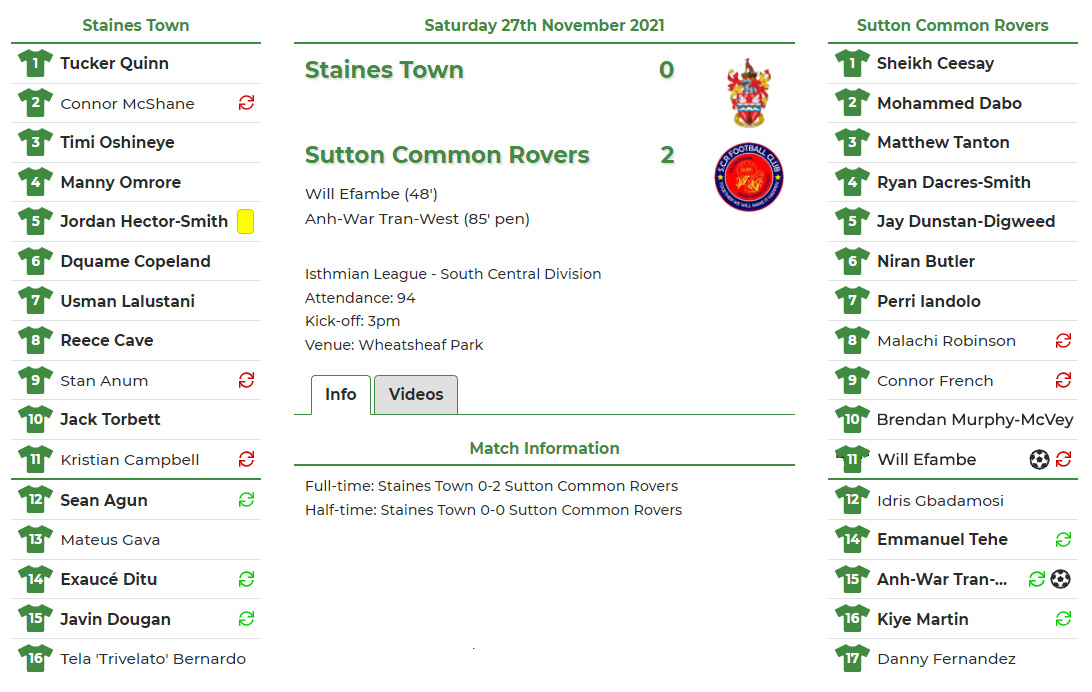