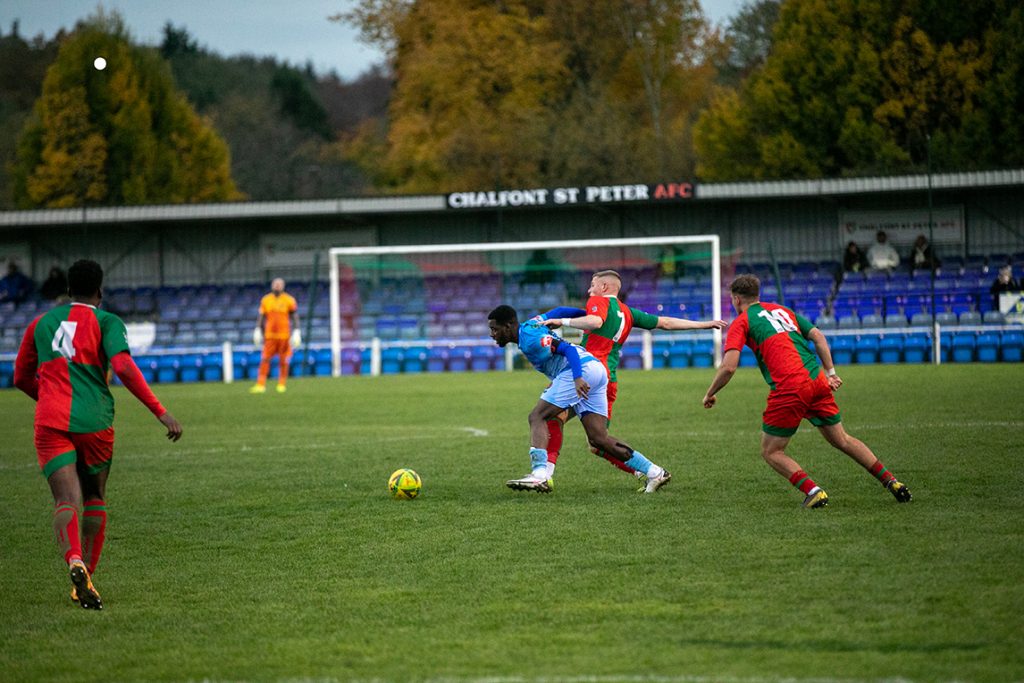 Rovers slipped to their second successive 3-2 defeat, after again fighting back from two goal down to level things up, only to concede a third when in the ascendancy.

With defender Aaron Goode having returned to Hartley Wintney the previous day and with no Aaron Bogle, it was a bit of a makeshift backline that took the field, with Ryan Healy thrown in as an emergency centre-back.

The lack of cohesion showed massively in the opening stages with no-one taking control of the ball into our backline and Chalfont should have opened the scoring inside three minutes, when Shamal Edwards pounced on our indecision, rounded Craig Bradshaw, but a heavy touch forced him wide and we were able to get bodies back and clear. Josh Boorn forced a save from Bradshaw as his effort took a horrible bounce forcing the Rovers keeper into an unorthodox stop.

Chalfont opened the scoring on 11 minutes, Rovers failed to clear a ball into their area, and it eventually fell to Dawid Rogalski who fired home low to Craig Bradshaw’s left.

Three minutes later and it was 2-0, a shot from Shamal Edwards kicked up wickedly off the turf, forcing Bradshaw into a half save, and as the keeper raced for the loose ball he was adjudged to have hauled down Edwards. Rogalski fired home the spot kick.

Rovers were back in the game on 24 minutes, the lively Anh-War Tran-West drifted passed several players before being hauled down on the edge of the Chalfont area and Kiye Martin curled home a superb free kick to reduce the arrears. Tran-West then curled a shot over the bar as Rovers were in the ascendancy.

On the half hour the scores were level. Tran-West linked up with Ryan Dacres-Smith who found Matt Tanton and his superb cross was brilliantly headed home by Connor French for 2-2. We continued to dominate without really threatening the Chalfont goal. French went into the book for a foul on Luke Elliott towards the end of the half, and the sides went in level at the break.

Chalfont retook the lead inside 30 seconds of the second half. A ball forward found Edwards and he raced clear to fire low beyond Bradshaw for 3-2. Bradshaw then did well to get down to save a low shot from Rogalski before reacting quickly to grab the headed rebound. James Richardson curled a free kick into the wall as our sloppy start to the half continued.

We made a change on the hour with Martin making way for Perri Iandolo. We went close to levelling things up on 65 minutes. Malachi Robinson whipped over a cross, the bounce deceived the Chalfont defender, French fired goalwards bringing a tidy stop out of Andrew McCorkell low to his left. Shortly after and 9 capitalised on us over playing, but fired his effort over the bar.

With 15 to go Tran-West and Will Efambe linked up and set up French, but his shot was saved by McCorkell. It was Efambe’s last action as we made a double change, replacing him and Merrick James-Lewis, with Danny Fernandez and Mo Dabo.

The game ended in controversy, a spell of Rovers pressure had already seen several goalline blocks by desperate Chalfont defending, and in the final play of the game a ball into the box was clearly handled by a defender, but was deemed accidental and play continued. The Rovers players were incensed, but the whistle blew and the game was up.

Next up the lads head off to Faversham Town for our first ever Velocity Trophy tie.

Graphic thanks to Football Web Pages