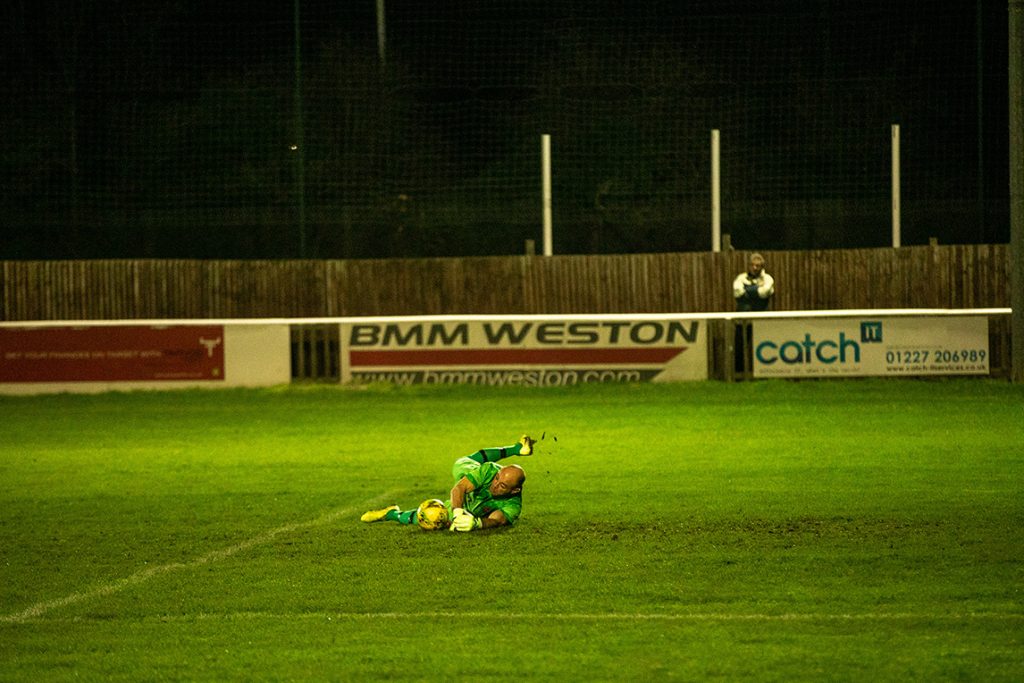 Rovers bowed out of the Velocity Trophy on Tuesday night, when a double from Emmanuel Oluwasemo was enough to take hosts Faversham Town through to a second round trip to Thatcham Town.

Darren Salmon was forced into numerous changes from the Saturday defeat, with no fewer than five of that starting line up unavailable, leaving him with one out and out forward, in the shape of Perri Iandolo who was making his first start; and no keeper, with Aaron Bogle once again donning the gloves.

After a cagey start with both sides struggling on a difficult playing surface, it was Faversham who struck first on 15 minutes when Oluwasemo rose highest at the back post to head home a cross.

Faversham continued to press, and almost increased their lead when Tyrell Richardson-Brown took advantage of hesitation between Malachi Robinson and Ryan Healy, but could only flash his effort across the face of goal.

We were gradually settling into the game. Robinson bought a comfortable save out of keeper Dan Smith from a free kick after Matt Tanton had been fouled And almost immediately latched onto a poor clearance by Smith, only to see his shot sting the keepers hands.

Will Efambe was released by Iandolo on 35 minutes, but having rounded the keeper he was thwarted by an offside flag. At the other end Eddie Allsopp saw a shot blocked by Jake Hill with Tyrell Richardson-Brown firing the rebound high over the bar.

With five to the break we played our best football of the game with a flowing move from left to right and back again, ending with a low Efambe strike going wide of the right hand post.

Bogle saved well from Grant on 42 minutes, before the half ended in uproar. A poor challenge left Tanton in a heap, and shortly after Allsopp, blind side of the officials slammed Tanton to the floor off the ball. In the ensuing melee, Aaron Goode found his way into the book for something he said.

It left the hosts going in at the break one goal to the good.

Iandolo curled a free kick over the wall but into the keepers arms at the start of the second half, and the lively Oluwasemo saw his strike cannon off the crossbar.

Five minutes into the half and Faversham were reduced to ten men, when Allsopp, already well on the officials radar, further blotted his copybook and saw red, with Brendan Murphy-McVey seeing yellow for us.

It didn’t stop the hosts though and almost immediately Oluwasemo wriggled through a couple of challenges before firing low under Bogle for 2-0.

We were almost back in the game immediately, Goode split the defence with the pass, Iandolo rounded the keeper, but as in the first half the flag went up, and we were thwarted again. On the hour, a tremendous low cross by Tanton found Jay Dunstan-Digweed, but he somehow screwed his effort wide of the left hand post from five yards out.

Dunstan-Digweed bought a good diving save out of Smith on 63 minutes. We introduced Mo Dabo and Emmanuel Tehe with 25 minutes to go, in place of Ryan Dacres-Smith and Tanton. Hill saw his header from a Robinson corner headed off the line, and the follow up by Healy was saved by Smith.

We finally got on the scoresheet with just over 15 minutes remaining, a free kick into the area was only half cleared by Faversham, Dabo played the ball back in, and substitute Naseem James, on for Iandolo fired low beyond 1 to his right.

We pressed towards the end, but the closest we got to an equaliser was in stoppage time when Dunstan-Digweed saw his header tipped over the bar. And that was that. 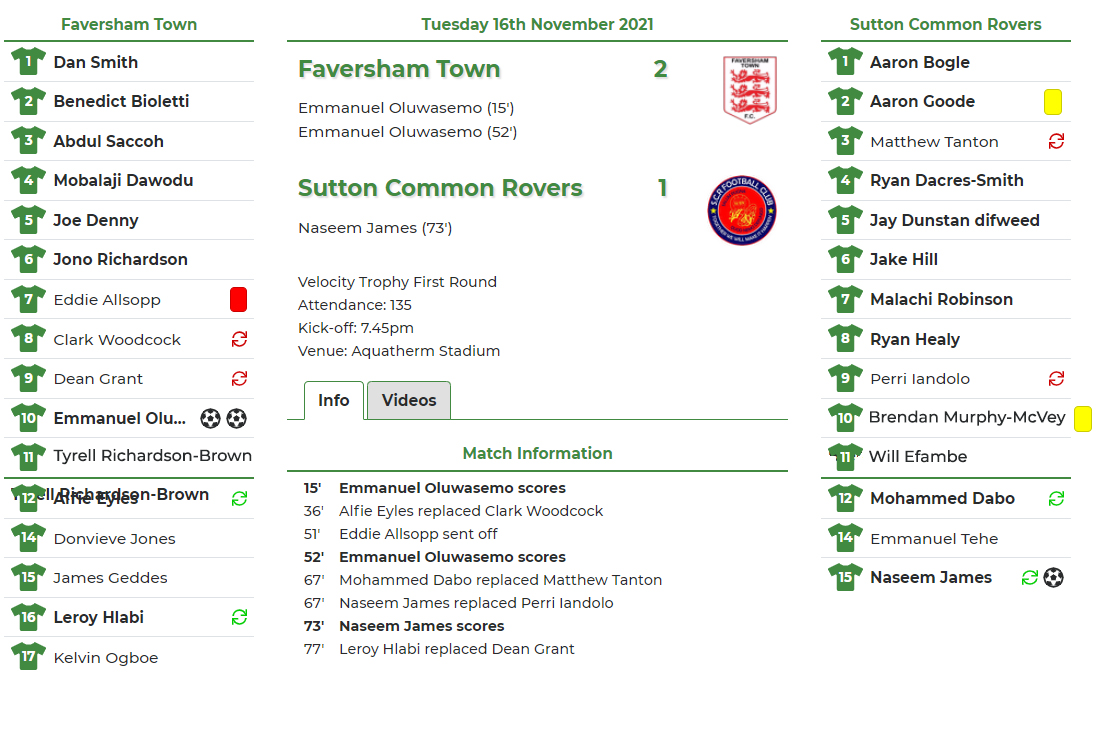