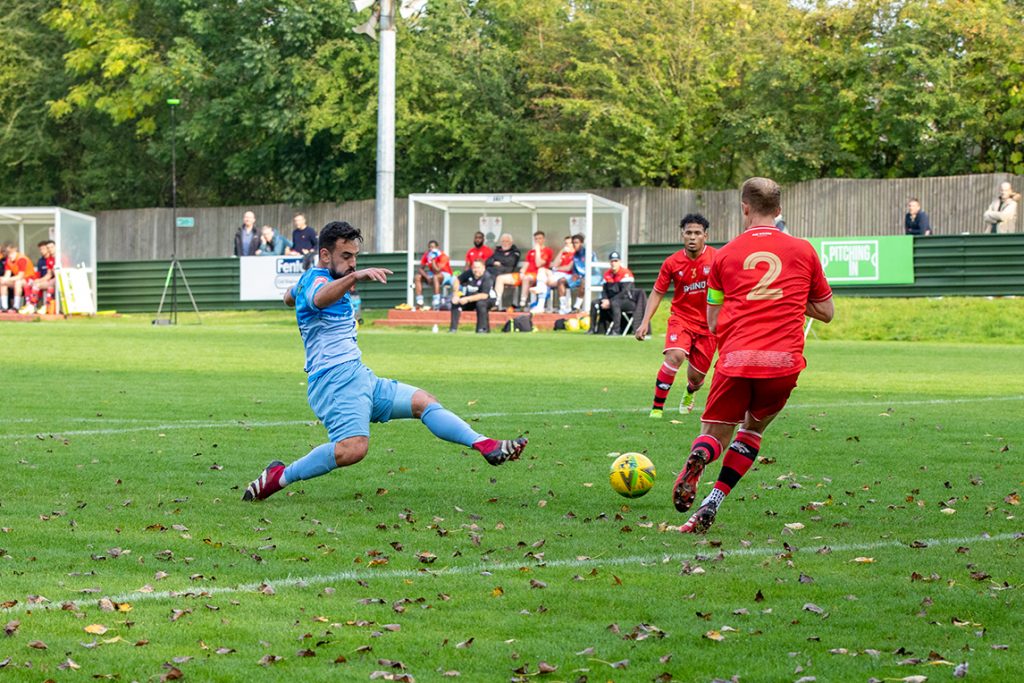 The first team ended a disappointing run of results and bounced back from Tuesday’s mauling against South Park with an excellent 3-2 win over Northwood, in a hugely entertaining fixture.

Darren Salmon made six changes from Tuesday, in came new signings Craig Bradshaw and Aaron Goode, with Danny Fernandez and Ryan Dacres-Smith back from suspension, and starts for Matt Tanton and Tyrell Butler. Dropping out were Mackenzie Foley, Ryan Healy, Emmanuel Tehe and Mohammed Dabo (all to the bench), Ollie Twum and Bolaji Williams,

A lightning start saw both sides have chances in the opening five minutes, with Shakeel Morris seeing an early effort blocked by our ball, and Goode putting a free header for us over the bar. On ten minutes a deep cross from Northwood was well defended by Goode as both sides were attacking from the off.

We took the lead on 13 minutes, the guile of Brendan Murphy-McVey saw his clip a ball over the top where the overlapping Aaron Bogle (no…it’s true) hooked the ball into the area to Butler, he held off James Gurteen and squared to Fernandez who fired home.

Gurteen and Leo Decabo fired over from distance as the hosts pushed for an equaliser and Morris almost capitalised on a low Bradshaw clearance but could only return the ball back to the big keeper.

It was 1-1 on 25 minutes, Morris cut inside from the left and with no defender closing him down, fired low into the bottom corner. Northwood now had their tails up and were forcing Rovers back, and twice in a minute Bradshaw had to be at his best, firstly denying Adam Cash, and then producing an even better stop to keep out Morris.

It was against the run of play that we took the lead three minutes before the break. Fernandez was pulled down by Ryan Avery and from the free kick Murphy-McVey fired low beyond Dan Purdue. The lead last barely 30 seconds with Leo Decabo unleashing an effort from 25 yards that flew passed the unsighted Bradshaw to send the sides in level at the break.

Northwood started the second half brightly and we were again reliant on some solid defending by the backline to keep the hosts at bay, however the first real chance of the half fell to us.

Adam Allen did superbly on the right and his deep cross was just too far in front of Fernandez, who could only guide his header wide. Morris then volleyed over for Northwood.

Ishmael Ehui fired a free kick over and then Decabo saw an effort blocked by Jake Hill. We retook the lead on 71 minutes. Substitute Ryan Healy played the ball into Murphy-McVey, he dummied the ball to Butler who fired low beyond Purdue for 3-2.

Almost immediately Gurteen was just unable to get a head onto a deep cross and as time ticked on, we began to look more secure. Woods pushed more and more towards the end. Morris scuffed a low shot wide, a deep cross by Sam Jenkins was brilliantly defended by Bogle at the back post before we had one last scare.

A misplaced pass in the middle of the park saw Gio Palmer race clear, he rounded Bradshaw, but with a worsening angle and Hill racing back to cover, he could only turn his effort against the post and we survived to pick up a huge three points.