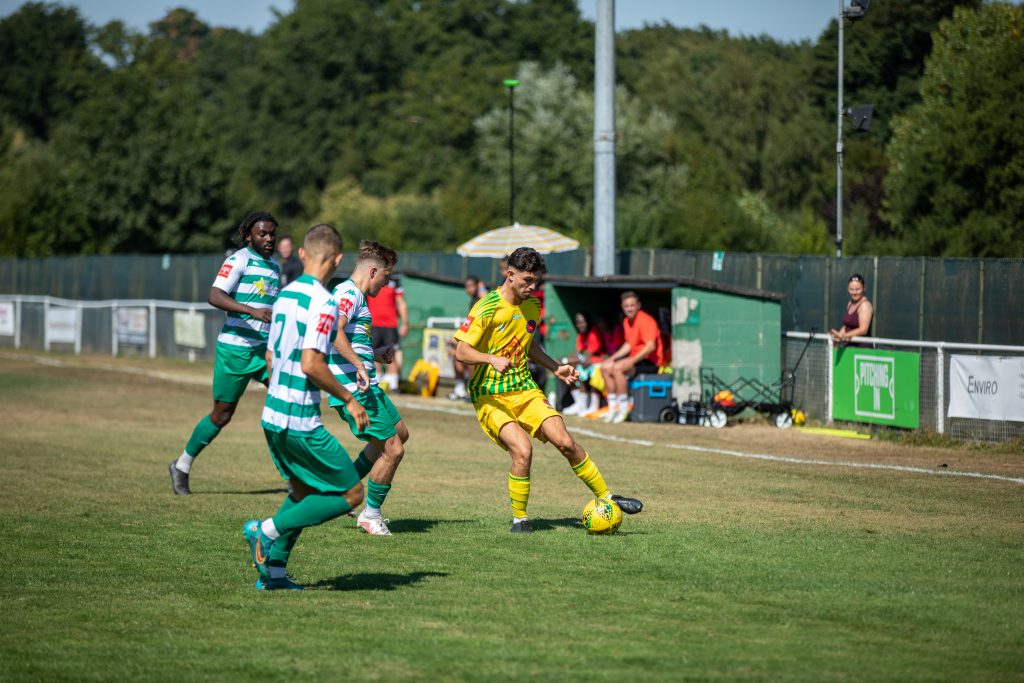 Darren and Lee made three changes from the side that lost at Fisher. Ryan Stedman-Hoyte returned to the line up, whilst their was a first start for Matt Surmon and a debut for Courtney Swaby. Matt Tanton, Ryan Dacres-Smith and Jake Riddington all made way.

Having failed to trouble the keeper on Wednesday the last thing we wanted in our opening league game was to concede an early goal. However that’s exactly what happened as we conceded the first goal of the Isthmian South Central cmapaign.

A long free kick was headed down by Andy Kabuikusomo to Anokye-Boadi and he fired beyond Endurance Johnson for 1-0. Our response though was positive, and we were level on 12 minutes. Rhamar Garrett-Douglas was fouled by Gabriel Odunaike.
From the free kick debutant Courtney Swaby swung in the delivery and Bertie Lloyd rose highest to glance the ball beyond Matt Kerbey for 1-1.

Five minutes later and it was 2-1, Swaby saw his curled free kick superbly saved by Kerbey, but from the corner Lloyd flicked the ball on and Shawn Lyle poked home from close range – didn’t celebrate to the camera though!

Chipstead should have been level midway through the half, a high hanging free kick was met by Kabuikusomo and bounced across the face of goal.

Five minutes later and neat link up between Stephane Akmel and Tony Halsey eventually led to the ball falling to Kyron Richards but his effort went just wide of the left hand post.

Rovers were now playing with a level of confidence not seen so far this season, moving the ball nicely around the park and looking dangerous on every attack. However despite this it was Chipstead who struck on the stroke of half time. A hopeful ball forward led to a mix up between Johnson and Odogwu-Atkinson, and the ever dangerous Kabuikusomo fired home from a tight angle.

Unbelievably though Rovers retook the lead before half time. A corner on the right was swung in by Swaby and powerfully headed home by Richards for 3-2.

Chipstead started the second half brightly, and Michak Stanic-Stewart fired wide from distance early in the half, and the hosts dominated the opening exchanges. Kabuikusomo did well to break on the left, but superb defending by Garrett-Douglas kept him at bay. Shortly after and Kabuikusomo fired over the bar.

Having weathered the storm, we gave oursleves some breathing space on 65 minutes. A quick break by Akmel saw a neat interchange of passes between him and Halsey, only ending when Akmel was hauled down by 6. From the spot kick Lyle sent Kerbey the wrong way for 4-2.

With 15 minutes to go Chipstead were reduced to ten men. A poor challenge by Odogwu-Atkinson on Kabuikusomo, which led to him receiving a yellow, saw Kabuikusomo lash out and pick up a straight red.

As often happens, the ten men were fired up, and almost immediately a stunning crossfield ball by Zohair Ali found Lewis Pearch and his early strike nestled into the bottom left corner for 4-3.

Chances continued to come for both sides, Stanic-Stewart headed wide when well placed and the impressive Surmon went agonisingly close with an effort from just inside our half. Halsey then had a chance to seal the game latching onto a huge Johnson clearance but Kerbey saved bravely at his feet and the chance went begging. However we had secured our first three points of the season.