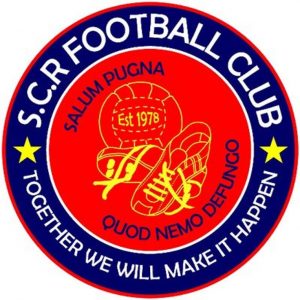 Chairman and Life President Alan Salmon founded SCR F.C in 1978, when the club began life as INRAD FC, based in Carshalton. The club entered a new era when Alan moved to Sutton and arranged sponsorship with his new neighbour, CENTRE 21 FC was born. This era saw the club running one Saturday side, three Sunday sides and three Youth sides. Centre 21’s sponsorship continued until the club’s youth players were no longer under 21 years old.

The club again sought new a identity, SUTTON COMMON ROAD FC was formed and subsequently abbreviated to SCR FC. Since then the club has had five major sponsors whose names have been incorporated into the clubs affiliated name: SCR PLOUGH (twice), SCR GRAPES, next the club’s longest sponsor SCR LITTEN TREE (7 years) & finally SCR Kingfisher, Ewell with whom we started our venture in Saturday football in 2004/05.

It was at this point that the club took the decision to revert back to using the SCR name alone, feeling that as we strive for continued promotion we needed to disassociate ourselves with the whole ‘pub team’ image. The club however did take sponsorship form the Fox & Hounds, Carshalton for the Sat first team in 2006/07, but the decision was made that the pub name would not be incorporated into our own, for the above reason…

The club entered yet another new era this season, with the introduction of a third Saturday side (Messers Alex Avis & Tony Williams) and the 1’s moving to the Middlesex County FL (and a name change SUTTON COMMON ROVERS) in the pursuit of combined Counties football, having made an unsuccessful application from the Surrey South Eastern Combination at the end of season 2006/07 having finished joint top (3rd on goal difference… -1 goal)

A third place finish in the Middlesex County League Premier division in 07/08 meant that our promotion to the CCL was not assured but months of hard work & determination from the management team SCR eventually secured a place for the clubs 1st time in their 30 year history at the league AGM in June 2008 and the reserves moved into the CCL reserve division under the guidance of Alex Avis & Justin Salmon.

Season 08/09 saw the latest name change of the club, to form MOLE VALLEY SCR FC reflecting the area in which we played. Season 09/10 saw the club reach a Surrey Cup final, narrowly being defeated by Sutton United after a 1-1 extra time score line on penalties and in the same season compete in the FA Vase for the first time in our relatively short history. We finished Champions of Division One at the second time of asking, narrowly piping Worcester Park to the post in a fine run which saw us finish 3 points clear on the final match of the season, assuming as we believed, we were awarded the points from the postponed Coulsdon match who unfortunately were unable to field a side for our scheduled league game some weeks earlier.

The following season saw the club play at our highest level to date, and make our FA Cup debut, although this lasted just one game, and ended in a 5-0 defeat against Chertsey Town. The club managed two seasons in the Premier Division, before being relegated back to Division 1, following a start to the season that saw 12 straight league defeats. The 2012/13 season started with a rebuilt side and expectations of consolidation, however a 20 game unbeaten run propelled us into runners up spot, and a much coveted promotion back to the Premier Division.

2013/14 started brightly, but went to the last game, and a point saw survival. It was the same the following season, and although we lost (2-0 at home to Guildford City), we still managed to survive. For the 2015/16 season, there was a change of name to Sutton Common Rovers, and after much hard work by the Salmons, a return to Sutton, and a ground share with Sutton Utd.

The following season, 2017/18 we recorded our highest ever placing, finishing 3rd in the Premier Division, and reached the semi final of both the Southern Combination Cup and the EL Records Premier Challenge Cup.

2019/20 saw the side a little off the pace in the league, when it was called to a halt, but with games in hand a place in the top 5 was possible. It was in the national cup competitions that new records were set, with the side reaching the 1st Qualifying Round of the FA Cup for the first time (after wins over Molesey 1-0, after a 1-1 draw; and Eastbourne Town 3-0), the FA Vase saw further success, with wins over Snodland Town 5-1, Raynes Park Vale 4-0, Lancing 1-0 (after a 3-3 draw); and Christchurch 2-1 taking us to the fifth round, where we bowed out to Western League AFC Bitton 2-1, after a disappointing performance down in Bristol.

Our first season in the Isthmian League saw a 17th place finish, on goal difference behind both Westfield and Tooting & Mitcham Utd, and avoidance of the relegation play offs. We also made our debut in the FA Trophy, albeit briefly, losing our only fixture away at Ramsgate.

We reached the 2nd qualifying round of the FA Cup for the first time, thanks to wins over Steyning Town and a shock win at Isthmian Premier Cray Wanderers, before losing after a replay to Jersey Bulls.