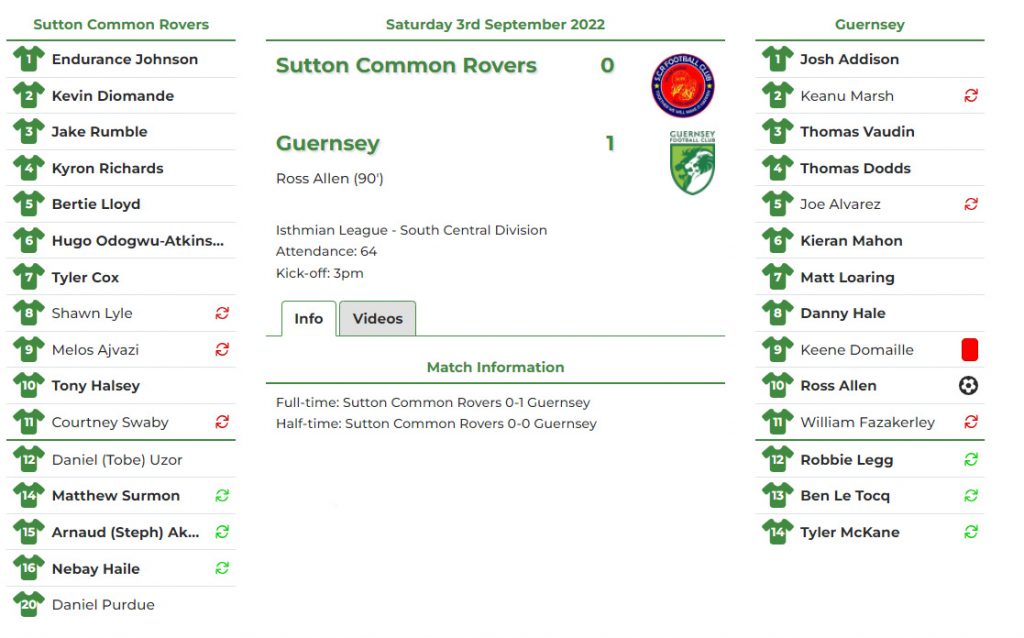 Rovers succumbed to a last gasp Ross Allen goal as their home woes continued on Saturday, in a 1-0 defeat against Guernsey.

Guernsey made the brighter start, and had Rovers under some early pressure, even seeing an early Allen strike ruled out for offside.

We gradually started to get into the game, and around the 20 minute mark Tony Halsey twice went close, a flicked header being gathered by Josh Addison and a low strike being blocked behind for a corner.

Guernsey saw a fierce effort rom the edge of the box by Danny Hale blocked by Rovers Kyron Richards and a spell of pressure saw the Rovers backline stretched but holding firm.

There then followed a spell of SCR pressure, Halsey won a header and found Melos Ajvaji but his shot from the edge of the box flew over the bar, and a minute later Tyler Cox saw a shot deflected over the bar.

Hale fired a free kick wide five minutes from half time and back at the other end a good run by Courtney Swaby saw him set up Kevin Diomande but he fired into the side netting.

Cox shot over five minutes into the second half, and Guernsey’s Keene Domaille saw his effort blocked on the edge of the box. Cox then did superbly to beat his man and almost found Halsey, but the outstanding Thomas Dodds intercepted for Guernsey, something that was to be a feature of the second half.

We made our first change on 57 minutes with Nebay Haile replacing Ajvaji. Swaby fired an effort wide and Halsey almost opened the scoring, chasing a long ball and beating Addison to it, but Thomas Vaudin came round superbly to clear for Guernsey.

Addison did well to beat Haile to a long through ball and Haile fired high over the bar midway through the half. Shawn Lyle made way for Matt Surmon with just over fifteen minutes remaining, and shortly after Domaille saw red for a poor challenge.

Rovers upped the pressure, Arnaud Akmel found Halsey but his volley was deflected for a throw in. Cox saw a shot headed wide by Dodds, and then twice Dodds threw himself in the way of goalbound Rovers efforts to keep the game goalless.

Surmon and Haile then fired over efforts as time run out and it looked as though the game would end goalless. Deep though into stoppage time a free kick was played into the Rovers area, the backline switched off for the first time, and the ball dropped to Allen who snatched all three points for the Green Lions.