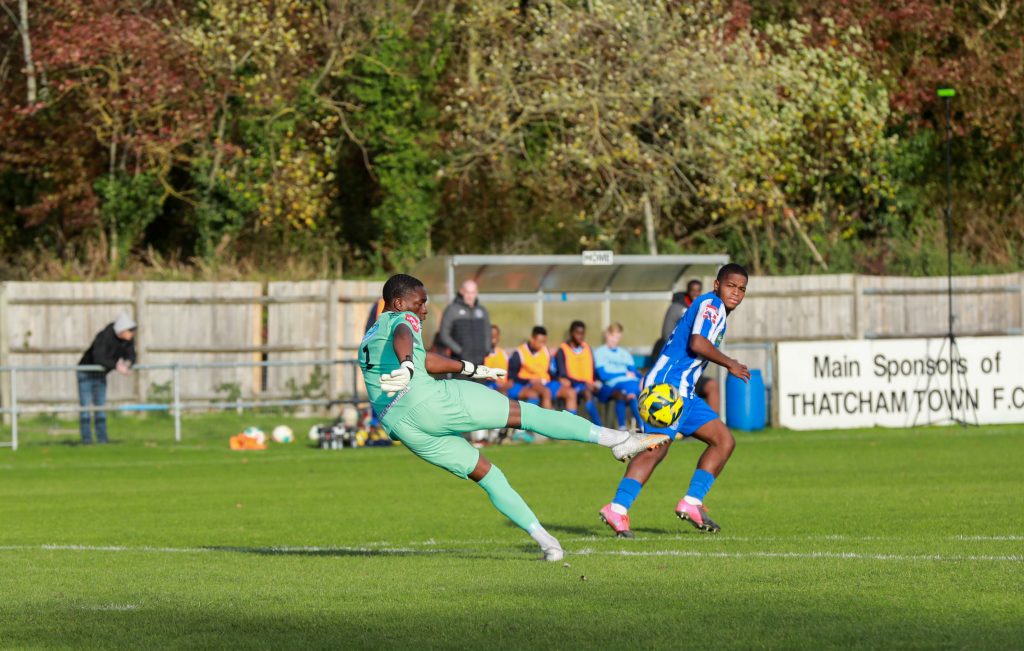 Rovers picked up their first win in eight games when a glorious late header from Shawn Lyle gave them all three points away at Thatcham Town on Saturday.

The line up saw one change from the side that had lost at South Park last time out, with Matt Surmon replacing Shawn Lyle. Rovers were off to a blistering start, a neat turn and through ball by Jephte Tanga on three minutes set Kevin Diomande away on the right and his low cross was turned into his own net by Joshua Adjei to give the visitors a 1-0 lead.

After the quick start the game settled down into a scappy midfield affair, and it wasn’t until the 11th minute that the next chance came. A couple of crosses into the Rovers box were cleared, and at the third attempt Cameron Rohaet-Brown headed straight into the hands of Endurance Johnson. Midway through the half and it should have been 2-0, a deep free kick by Rhamar Garrett-Douglas found Hugo Odogwu-Atkinson but he could only guide his header just into the side-netting.

A minute later and Thatcham should have levelled things up, a tremendous ball from the left found Rohaet-Brown, he drove beyond Garrett-Douglas, but dragged his effort wide of the right hand post. Swaby fired an effort high over the bar on 32 minutes, and with just over five minutes to go to the break, Johnson got down superbly to turn a low McKoy Palmer free kick wide. A minute later and this time Palmer curled his effort inches over the bar, and Rovers survived a major scare.

Just before the break and Rovers almost capitalised on a poor clearance by Thatcham keeper Morgan Campbell, but Kyron Richards saw his effort fly harmlessly over the bar, and Rovers went into the interval one goal up.

Thatcham started the second half brightly, and after a good build up on the left, the ball was switched quickly out to the right and Adjei fired an effort wide of the right hand post. Swaby fired over a free kick three minutes into the half, but Bertie Lloyd could only direct his header wide of the left hand post.

Palmeer fired a shot straight down Johnson’s throat ten minutes into the half, and Rovers made a double change with Kevin Songolo and Javin Dougan making way for Tony Halsey, and eventual matchwinner Lyle. Oliver Bourne headed over for Thatcham on the hour, and a couple of minutes later Swaby saw an effort deflected into Campbell’s arms.

Scores were level on 68 minutes in bizarre fashion, Johnson sliced a goal kick straight to David Nyarko who was left with the simple task of tapping the ball into an empty net, for his sixth goal in three games. Rovers were clearly rocked by both losing the lead and the nature of the goal and Thatcham sensed an unlikely three points. They chased and harried Rovers players into mistake, but were unable to test Johnson much more and with eight minutes remaining Rovers snatched the lead again. A Halsey throw was met by Lyle, who powered his header beyond Campbell for 2-1.

Into stoppage time and Thatcham almost grabbed a point, as Muhamadou Ceesay volleyed an effort inches over the crossbar, but Rovers held firm to secure all three points.