MISERY AT THE VILLA 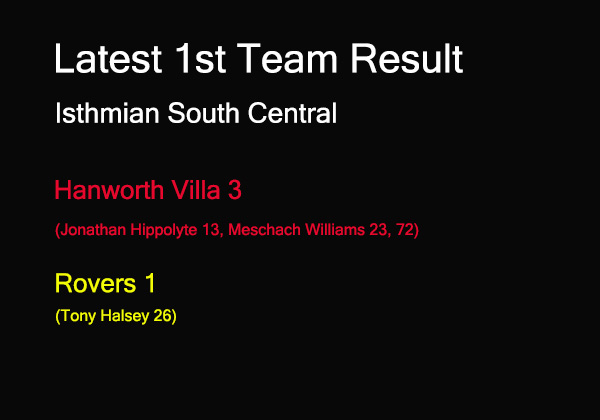 Greeted with a typically Villainous reception at Hanworth, energised perhaps by their recent run of form, Two draws and two wins in the last four games, a lively contest was anticipated. (You know we’d miss it if it didn’t happen!)

The game got underway, Villa electing to kick up the hill. With very evenly matched possession to start, the opening exchanges coming to nothing, Villa just edging the upper hand. The Villa left-back, Tom Scott, was causing us all sorts of problems on the left flank. An early assault into our penalty area by Meshach Williams was snuffed out by Kevin Diomande, resulting in a succession of Villa corners, the third glancing off the bar. Hugo Odogwu-Atkinson cleared our lines, finding Courtney Swaby, whose pace broke towards the Villa penalty area, playing in Tyler Cox. His shot was well blocked, but only as far as Matt Surmon, who blasted over the bar.

A free kick to Villa on 11minutes, from 40 yards out was floated over the penalty area, and was headed away by Odogwu-Atkinson, only as far as Williams who thrashed the ball over the bar. The game was quite end-to-end at this point but it was Villa that seemed to possess a more killer instinct.

Six minutes later a three on two attack by Villa saw a shot rebound from the underside of the bar into the path of Jonathan Hippolyte, which he slotted past Endurance Johnson for 1-0. Villa kept up the pressure with continued onslaught from Sam Merson , Williams and Hippolyte, working well together., and wreaking havoc in our box. Rovers then had a run of possession, resulting in a free kick 40yards out taken by Swaby. An enticing cross, but the keeper claimed it. Swaby then had a decent shot on target, but unfortunately straight at Terry Buss.

Villa, again on the break with Scott taking the ball out to the left beating Diomande for pace, and delivering a dream cross behind our back-line. Williams was there at the back post to slot it home for 2-0.

Rovers’ response was immediate. Following a surge forward, the keeper Buss mishandled the ball in front of Tony Halsey, a bit of luck going our way. No problem for Halsey from there. 2-1, back in the game.

On around 42 minutes, Diomande was alleged to have brought down Scott, just outside the penalty area to the left. A great free kick from Scott, saw Johnson punch clear, the ball recycled and lofted back into the box, Diomande heads clear, but the danger is not over as Richards picks it up in midfield, but can’t convert the cross. Villa were now enjoying a very productive, probing spell.

Just before half time Halsey received a yellow card for what looked like an innocuous 50/50 clash of heads. With the first half coming to a close, Kyron Richards takes his chance from distance outside the Villa 18yard box, but sent the ball just wide of the left upright. A final charge from Villa sees Williams weave his way into the box, for the Rovers defence to scramble it clear, but it falls to Theo Crawford whose shot was just wide of the right post. 2-1 to Villa at half time.

The second half started well for Rovers, with a Diomande breaking down the right at pace. His cross was met by Halsey, whose clever flick is directed narrowly over the bar. A huge chance and desperately unlucky. Minutes later a terrific block by Swaby 18 yards out set him on a blistering run on the right hand wing. Swaby then plays in Diomande, whose smart cross is defended only out to Richards who shot is narrowly over the bar. Huge claim for a corner as it looked like the keeper got a fingertip on it. Resulted in a booking for dissent, Surmon, but not picked up.

On 72minutes, Williams found himself in space on the edge of Rovers’ 6yard box, and executed a spectacular overhead kick to secures Villa’s third and leave Rovers with too much to do with the time remaining. A throw-in by Garrett-Douglas close to Villa’s penalty area provided a real chance for Sutherland, who was just unable to latch onto it. Villa then catch us on the break, with Merson drawing a great save from Johnson.

The rest of the half had little of note, due to the procession of substitutions, yellow cards and stoppages. A very frustrating game for a number of reasons, but to be fair to Villa, they were the better team on the day and deserved the win.

Big thanks to Jon Tanton for the report