ROVERS END SEASON WITH A WIN 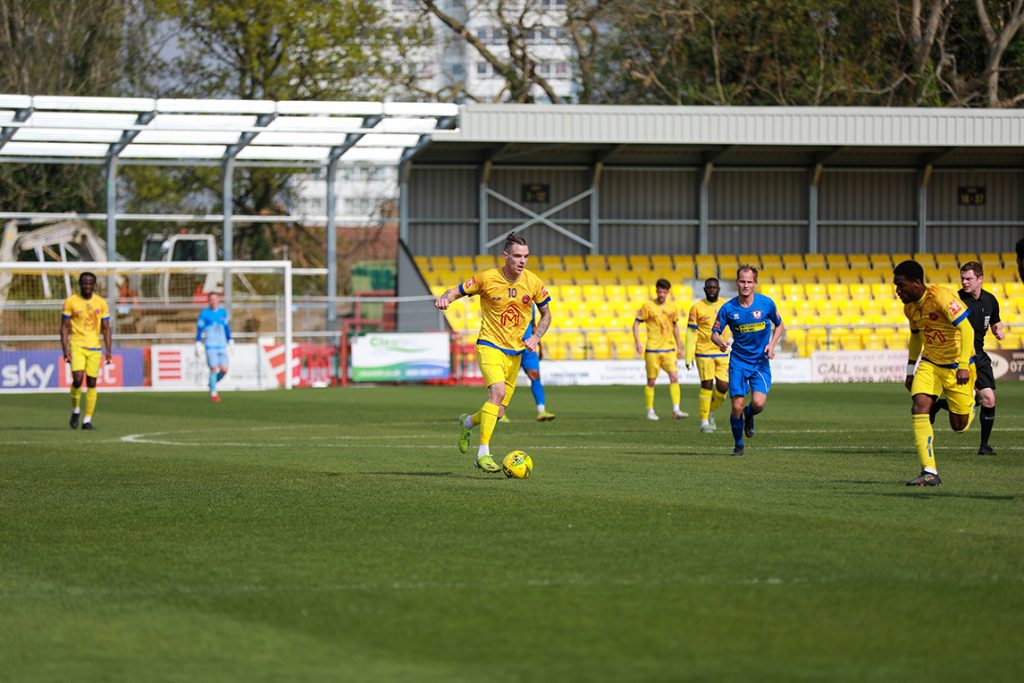 Rovers ended their first Isthmian League campaign, and their six year tenancy at Sutton Utd, with a hard fought win over Ashford Town (Middx) on Saturday.

Darren Salmon made three changes from the side that had drawn at Chipstead, Matt Tanton returned to the line up on the occasion of his 150th appearance, Ryan Dacres-Smith and Christophe Aziamale were both restored to the starting line up, Tobe Uzor and George Baker dropped to the bench, with Anh-War Tran-West out injured.

The first real chance of the game came on six minutes, persistent work by Tony Halsey saw him force an error and win possession just outside the Ashford area, forced wide by Dale Burnham, his low cross was only half cleared to Perri Iandolo but his effort was deflected behind for a corner, and eventually a shot by Ryan Dacres-Smith went out for a goal kick.

Rovers were enjoying a bright start, but despite several corners they were unable to work Shay Honey in the Ashford goal, and the first save of the game came from Filip Chalupniczak on 15 minutes, getting down well to turn a Wayne Ridgeley free kick wide of the right hand post. Shortly after and the same duo were in action, with Chalupniczak doing superbly to turn Ridgeley’s free kick over the bar.

Arnaud Akmel saw an effort comfortably gathered by Honey on 18 minutes, and five minutes later a long Halsey through caused problems in the area, and from the half clearance Iandolo fired wide. Rovers continued to have the upper hand, and after more pressure had forced an Ashford mistake, Dacres-Smith fired wide from the edge of the area.

Ashford thought they had opened the scoring on the half hour, a great move involving Ridgley, Connor Holland and Tommy Brunton eventually saw David Pitt fire beyond Chalupniczak, but a raised flag saved Rovers. Ridgeley then went into the book for a poor challenge on Tanton just before the interval.

Substitute George Baker bought a decent stop out of Honey early in the second half, before the visitors started to get on top, Holland found Daniel Brown but he was well defended by Jake Hill, and from the clearance Sam Humphreys saw his shot saved by Chalupniczak.

Humphreys then played in a vicious cross towards Brown, but a superb clearing header by Ryan Stedman-Hoyte cleared the danger. On the hour, Ryan Healy replaced Stedman-Hoyte, and a minute later a mazy run by Kain Adom bought a good low save out of Chalupniczak as Ashford looked to gain the upper hand.

Halsey bought a superb save out of Honey on 70 minutes, with a fierce header from an Iandolo corner. From the follow up corner Ashford broke quickly, and Adom was hauled down on the edge of the area by Healy. Fortunately for Rovers the free kick was driven into the wall, and was cleared.

It looked as though the game would peter out to a goalless draw but Rovers struck in the 83rd minute. Breaking out of defence, Iandolo found Halsey who drove forward and played in Akmel, his curled effort from just outside the area beat Honey but cannoned against the bar, with the ball bouncing nicely for Halsey to volley home the only goal of the game.

Ashford responded positively and put us under an aerial bombarbment from a succession of long throws, and Chalupniczak was forced to punch a goalbound effort away from under the crossbar.

Considering there was nothing to play for, the game ended somewhat fractiously, with a succession of poor challenges which saw Hill and Daniel Brown end up in the book. Deep into stoppage time, and Ashford had their final chance to pick up a point, substitute Nash Doukoure cut inside from the left but his low drive was superbly blocked by Dacres-Smith, and Rovers picked up a last win at Sutton Utd. 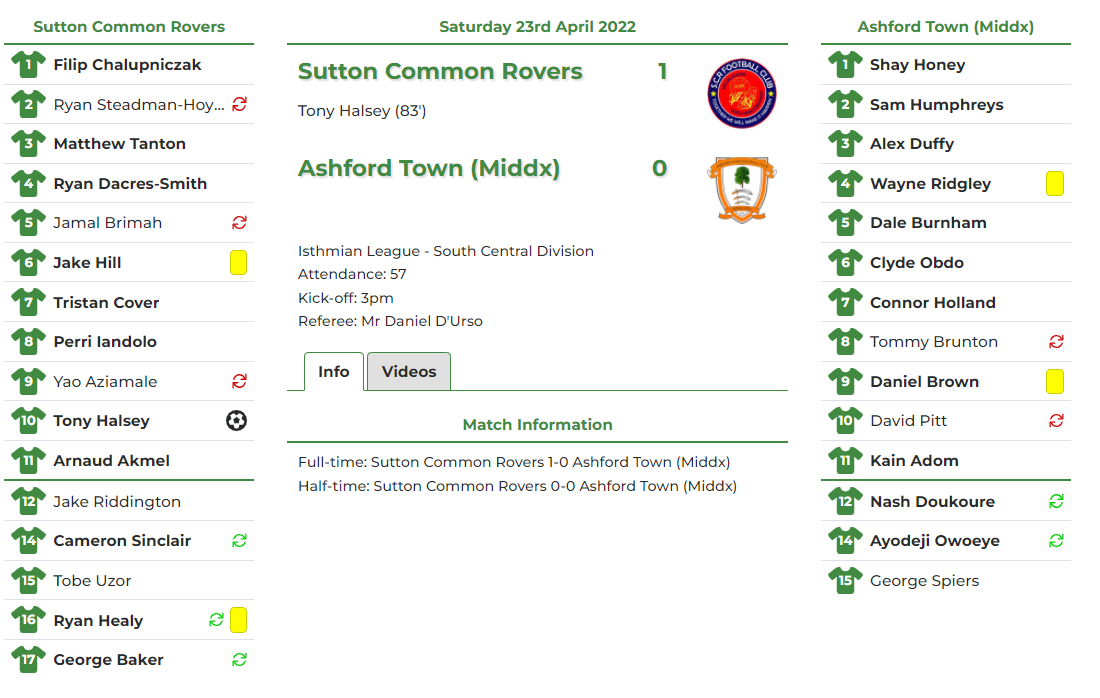