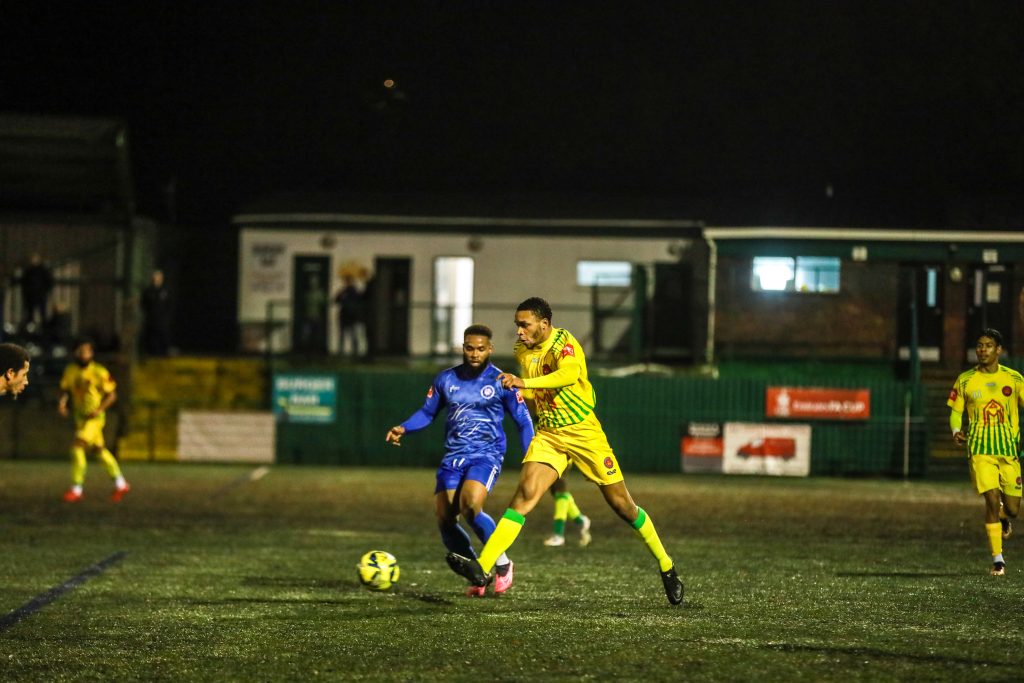 Rovers slumped to a sixth straight league defeat when they suffered a case of post-Christmas blues against high flying Marlow.

After a slow start it was Rovers who had the first chance on eight minutes when neat work by Tyler Cox saw him link up with Shakeel Morris and Courtney Swaby and set up Rhamar Garrett-Douglas but his effort was deflected wide. A minute later and a poor clearance by debutant keeper Dan O’Donovan only reached 11 he quickly played the ball in to 8 but Ryan Stedman-Hoyte was across quickly to clear.

Marlow had a goal disallowed on 12 minutes when a low cross by Nawaf Naheer Omar found the impressive Aaron McLeish-White but he had strayed just to far forward and saw his strike ruled out for offside. We responded positively, and after neat work by Garrett-Douglas a decent Siao Blackwood cross was headed goalwards by Brian Testolin and was blocked by Louis Rogers, with more than a hint of handball.

Josh Boorn whipped in a cross from the left on 20 minutes but McLeish-White could only guide his header against the post and a minute later McLeish-White chipped an effort over the bar after a poor O’Donovan clearance.
Rovers should have taken the lead midway through the half, Testolin saw his shot deflected away from goal, Garrett-Douglas’s low cross was heading for Morris, but Rogers was able to intercept and the chance was gone.

Testolin forced a tidy save out of Aaron Watkins as Rovers had their best spell of the game. Morris was proving more and more influential and good work on the half hour saw him set up Cox but his shot was deflected behind for a corner.

Rovers took a deserved lead on 38 minutes, good work by Swaby and Cox saw them win possession on the left and find Morris. He drifted beyond Curtis Chapple and as Rogers came to challenge he fired low passed Watkins for 1-0.

Boorn forced a good save out of O’Donovan on the stroke of half time, with Benjamin Mulley’s follow up going high and wide and Rovers took a one goal lead into the break.

If the first half was up their with the best performances of the season, then you would be hard pushed to find a worse half than that of the second half.

Marlow were level seconds into the second half. A long ball forward was half cleared by Stedman-Hoyte and quickly transferred out to Toby Raggett and his shot was deflected beyond O’Donovan by Hugo Odogwu-Atkinson.

Five minutes later and the game had spun on its head as Marlow took the lead. A ball down the right found the flying Naheer-Omar and his low cross was fired home by McLeish-White.

We responded positively and a powerful run by Morris saw him set up Testolin and his shot was deflected wide, although, bizarrely given as a goal kick.

Cox whipped in a free kick, which was deflected behind by Boorn, as Rovers looked to get themselves level. The corner was weak and cleared.

Naheer-Omar crashed a fierce effort against the crossbar, with O’Donovan beaten and the visitors continued to up the pressure and looked to seal the game.

Naheer-Omar hit the side netting with a low cross as he looked to catch O’Donovan out at his near post and with 15 minutes remaining he crashed another effort against the crossbar with the young Rovers keeper beaten.

Rovers pushed forward again and after neat work by substitute Tyrese Sutherland, on for Testolin, Kevin Diomande saw his well struck shot blocked and cleared away for a throw in.

It was game over as the game ticked onto 90 minutes, a dinked ball over the top by Mulley saw Naheer-Omar race clear of Liam Holden and calmly fire the ball beyond O’Donovan.

Rovers ended brightly and a late chance for skipper Garrett-Douglas saw him clip the top of the crossbar from distance, and that was that.

Rovers need to find some form from somewhere, as they continue to slide down the table.