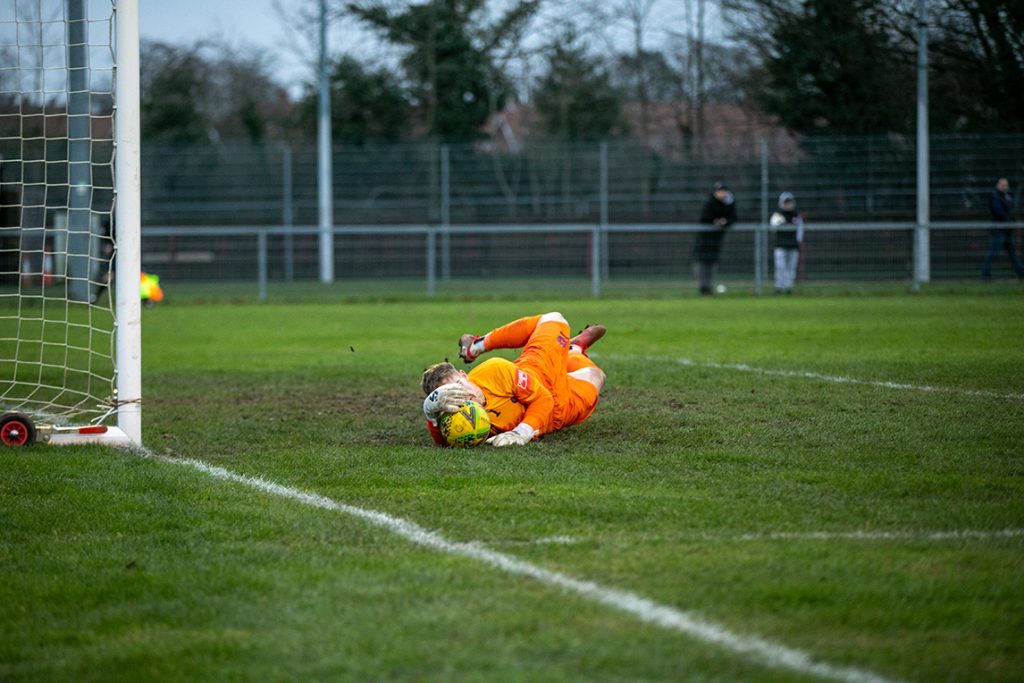 A late goal, for the second consecutive week, denied Sutton Common Rovers a share of the spoils away at South Park on Saturday.

Darren Salmon made one change from the side that has lost in heartbreaking fashion to Bedfont Sports the previous week, with Yao Christoph Aziamale in for a debut in place of Tendi Quamina.

It was a bright start by Rovers, and in the opening minutes a driving run by Anh-War Tran-West ended with him being fouled just outside the area, but the free kick by Perri Iandolo was off target. Rovers then saw Iandolo and Kiye Martin link up to set up Aziamale, but he was denied by some good defending.

A glorious ball down the line by Park’s Gavin Quintyne found Ibrahim Jalloh but he was well marshalled by a combination of Jake Hill and Shawn Lyle. Park struck first on nine minutes. A raking ball set up Nabeel Ghannam on the right and his low cross was met at the back post by Melford Simpson who fired beyond Filip Chalupniczak. Shortly after and Adam Aziz strolled through the Rovers backline before putting his effort well wide of the right hand post.

Rovers started to get back into the game and after Aziamale had worked an opening, Ryan Healy saw his effort well blocked by Matthew Faithorn. Tran-West saw a shot blocked on 24 minutes and from the follow up by Healy, Mo Otuyo was out bravely as Aziamale looked to capitalise on the loose ball.

Chalupniczak did well to turn a shot from Aziz away before punching the loose ball clear. South Park picked up the scraps and a fizzed drive eluded everyone in the six yard box to go off for a corner.

James Dickson went into the book for a poor challenge on the overlapping Matt Tanton. Iandolo curled an effort over the bar ten minutes shy of the interval. Aziamale had a shot deflected over as Rovers pushed for an equaliser, and their efforts were rewarded on 42 minutes. Iandolo did well in the middle of the park and found Aziamale, and his driven cross was turned into his own net by Adonai Dacruz for 1-1.

The game was to swing dramatically in South Park’s favour just before the break as Rovers were reduced to ten men. First up Park’s Joe Bell decided to use Chalupniczak as a tackle bag much to the fury of the Rovers players and in the ensuing melee, Healy picked up a second yellow and saw red. Bell went into the book for Park.

Half time came with the scores level.

Chalupniczak did well to get down to a low strike by Ghannam early in the second half, and from his launched clearance, Aziamale almost fashioned a chance by his low cross was gathered by Otuyo. The game was swinging from end to end and Jalloh saw his shot blocked by Tanton.

Rovers forced a couple of half chances, a Martin cross was turned behind for a corner, and from the corner Germaine Dua saw his header turned wide by Jalloh. Back at the other end and Chalupniczak was out bravely to deny Ghannam. Ghannam, Simpson and Aziz then linked up well but Aziz dragged his effort wide of the right upright.

Rovers substitute Jephte Tanga looked to make an instant impact when on, and a lively run saw him fouled on the edge of the area but the free kick came to nothing. Jalloh shot over for South Park and as the hosts pushed for a winner, chances fell to both Simpson and Aziz but Rovers were holding firm.

Deep into stoppage time and a crossfield ball by Dom Pires was headed down by Simpson and as Rovers had switched off, substitute Danny Alderton fired home from close range to give the Sparks all three points.