SHEPPEY PUT TO THE SWORD 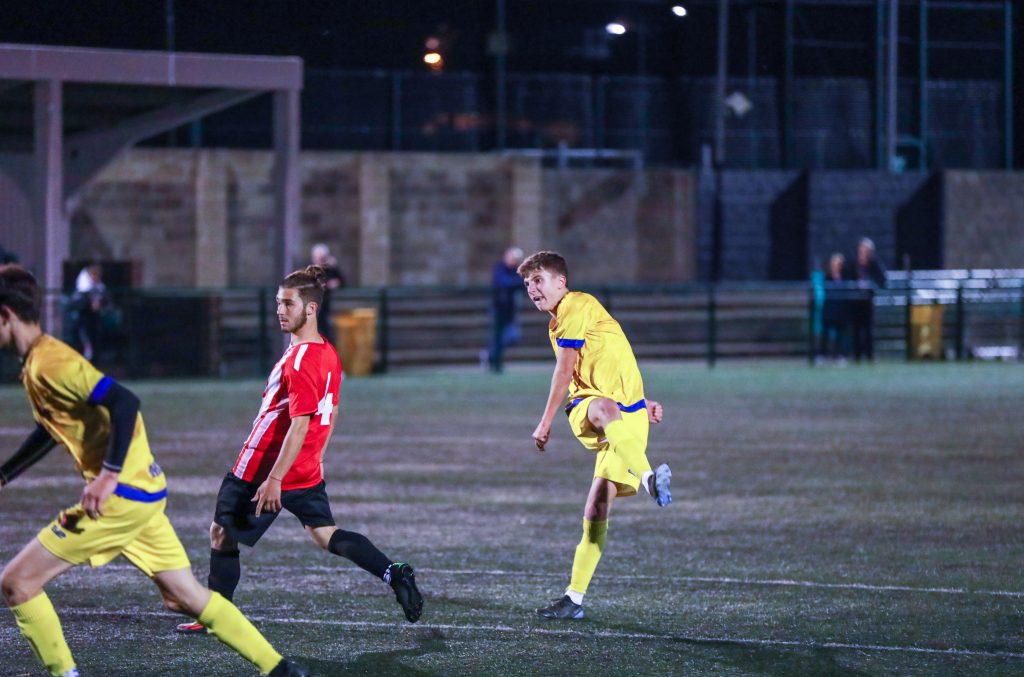 The U18’s continued their good league form last night when they came from behind to see off a very good Sheppey Utd side.

Rovers started brightly and George Vincent almost blocked a goalkeeper clearance on three minutes, but the visitors started to grow into the game and their pacy wingers were causing us a few problems.

Harry Hogben headed a corner wide on ten minutes, and Matt Hill and George Vincent combined to set up Abdul Sbaiti but he fired wide as we continued to dominate. Sheppey though we a more than useful side, and after a foul on the edge of our area a free kick was curled just wide of our left hand post. Sbaiti and Bobby Moore then combined to set up Vincent but he put his effort just wide of the right hand post.

it was somewhat against the run of play that Sheppey opened the scoring on 19 minutes. A ball down the right was met with a decent cross, which eluded our central defenders, and the forward finished neatly for 1-0. The scores were level five minutes later, a defence splitting ball by Matty Hill found Abdul Sbaiti, and his subtle lob beat the keeper to make it 1-1.

Vincent bought a good save out of the keeper midway through the half, and shortly after another Sbaiti effort drifted just wide. We hit the front for the first time just after the half hour, a corner was swung in from the left, a header hit the post and Harry Hogben was on hand to force the ball home from close range. Just before the break we went close to increasing our lead, Moore found Vincent and he forced a superb save out of the keeper and we went in 2-1 up at the break.

We continued our good form early in the second half and both Vincent and Hill went close early on. Ten minutes in and a dynamic run by Saville saw him drift beyond a couple of players and bringing another good save out of the keeper. It was all us in the early stages, although we did have to be wary of the Sheppey pace on the wings. A spectacular overhead kick by Vincent went just wide of the post, before we increased our lead on 70 minutes. A glorious ball down the left flank set George Vincent away, and having squared up his marker, he set the ball back to Hill, he calmly fired into the bottom right corner to ease us clear.

The young Rovers were controlling the game, and with Hogben marshalling the backline Sheppey chances were few and far between. Substitute Xavi Obi almost got through on a couple of occasions, but sharp keeping kept him at bay. The visitors were reduced to ten men late on after two silly fouls in quick succession by their central midfielder.