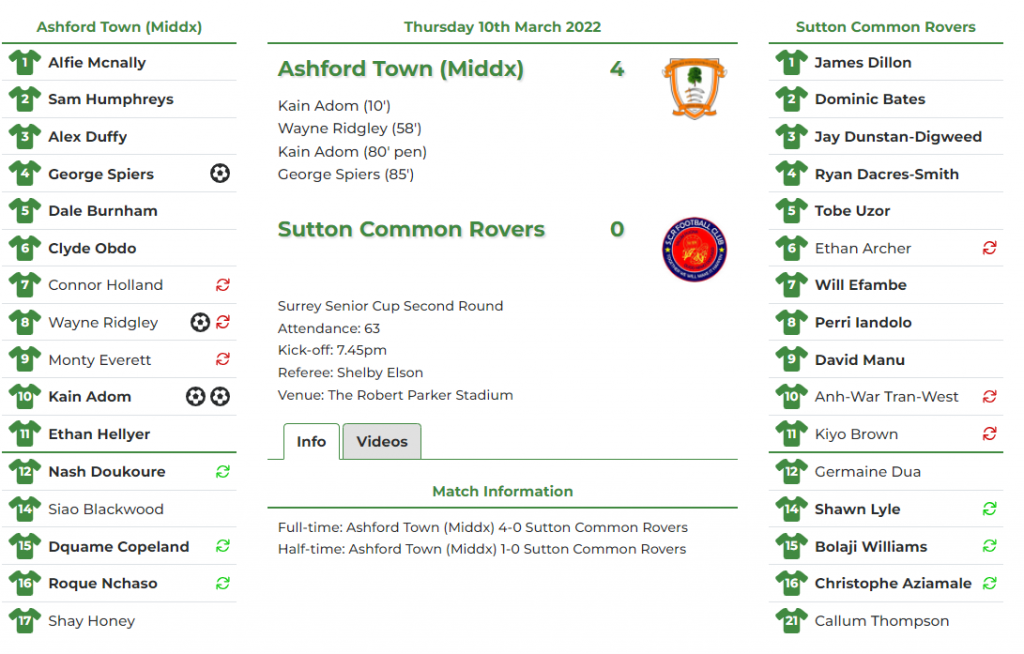 The First team bowed out of the Surrey Senior Cup in disappointing fashion, when they slumped to a 4-0 defeat away at Ashford Town (Middx).

Darren Salmon rang the changes to keep his squad fresh, with seven different starters from the side that had drawn away at Binfield, including a debut for former SCR Colts player Tobe Uzor.

Ashford made a bright start and Rovers were forced to scramble clear an early free kick and the hosts continue to dominate, forcing a succession of corners, all of which were overhit.

It was no surprise when Ashford took the lead with ten minutes on the clock. A huge clearance by Alfie McNally flew over the Rovers backline, and Kain Adom round James Dillon and fired home despite the scrambling efforts of Jay Dunstan-Digweed. Ashford almost increased their lead on 15 minutes when Ethan Hellyer broke down the left, after Rovers had given the ball away and Monty Everett was just unable to turn the loose ball home.

Rovers gradually started to gain a foothold in the game, but were unable to trouble McNally, and a succession of free kicks were all too close to the Ashford keeper, who was able to pluck them out of the air.

Having said that Rovers should have levelled things up on the half hour, when a Perri Iandolo free kick was powerfully met at the back post by Uzor, but he could only direct his header wide of the right hand post.

Late in the half and Ashford almost increased their lead, on a bobbly pitch, Rovers were continually caught overplaying, but fortunately Ashford were unable to trouble Dillon. Five minutes from the interval it should have been 2-0 a low cross by Hellyeer was only half cleared to Wayne Ridgley but his shot was screwed horribly wide of the left hand post.

Ethon Archer fired an effort wide from a late corner, and the sides went in with Ashford holding a one goal lead at the break.

Rovers made a bright start to the second half, and early on Will Efambe slashed an effort high over the crossbar from a tight angle. Five minutes in and Anh-War Tran-West did superbly to turn Sam Humphreys, but his low cross was well held by McNally as Efambe lurked looking for the loose ball.

Ashford increased their lead on the hour, when a Wayne Ridgley free kick caught Dillon flat footed and nestled in the bottom right hand corner of the Rovers net, leaving the visitors with a mountain to climb. Minutes later and it should have been 3-0, Hellyer broke from deep and as Rovers frantically appealed for offside he squared the ball towards Everett only for Dom Bates to tidy up for Rovers.

Dillon reacted sharply to deny Adom, and midway through the half only a brave header from Uzor prevented Dale Burnham from increasing the Ashford lead.

Rovers introduced Christoph Aziamale and Bolaji Williams into the fray, in place Anh-War Tran-West and Ethon Archer, but Ashford continued to hold the upper hand. Connor Holland fired an effort against the post and as Rovers struggled to clear, Ridgley saw his effort gathered by Dillon.

With ten minutes remaining the game was up, Williams bringing down Ethan Hellyer just inside the area. Adom stepped up to send Dillon the wrong way from the spot.

Scoring was completed with five minutes remaining when George Spiers was given the freedom of our six yard box to plant his header home for 4-0.

Whilst the cup exit was disappointing, next up for Rovers was a crucial league fixture with Chalfont St Peter.