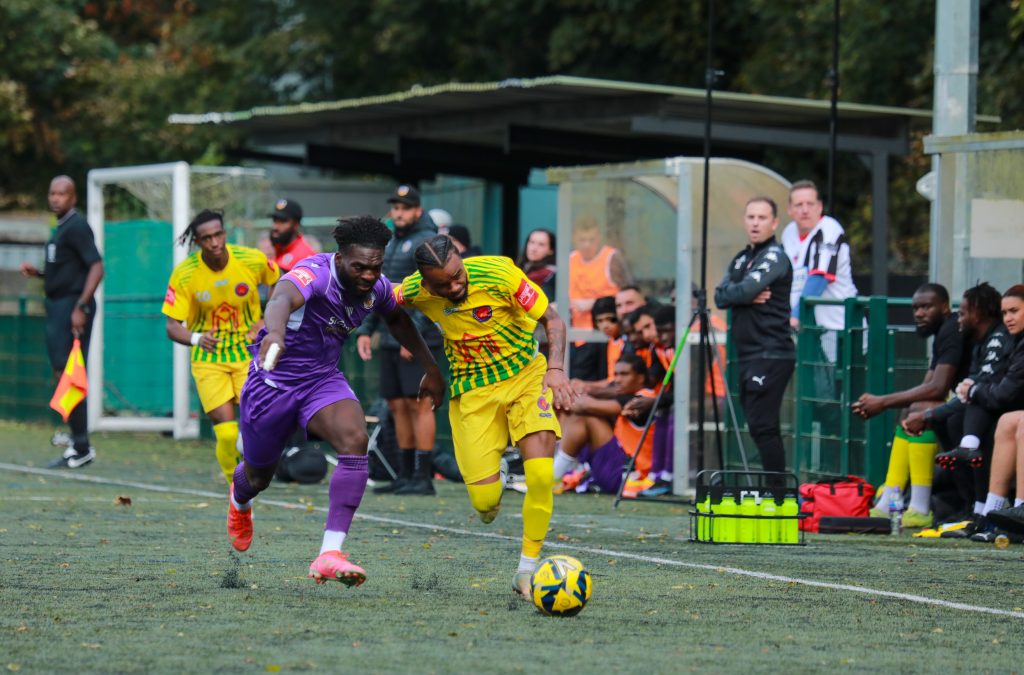 Rovers turned in their most complete performance of the season to date, when easing to a 3-0 win over struggling Tooting & Mitcham Utd.

It was a fairly quiet start, with neither side gaining the upper hand. Tooting probably had the first opportunity, when a foul on our left led to a free kick, and although Enoch Ako-Adjei’s delivery was into a dangerous area no-one could get a touch and it went harmlessly behind for a goalkick.

Rovers started to put some moves together and on six minutes Rhamar Garrett-Douglas and Courtney Swaby linked up, with the latters cross being well defended by Kyren Kirlew-Wright, just as it seemed Tony Halsey would open the scoring. Rovers continued to hold the upper hand, forcing a succession of corners, all taken by Swaby and causing huge problems for the Tooting backline.

Shawn Lyle and Halsey then combined to win back possession for Rovers and find Jephte Tanga, who was bought down just outside the Tooting area, close to the deadball line. From the free kick Rovers opened the scoring, another dangerou Swaby delivery found the head of the Kyron Richards who planted his header beyond Jet Harris for 1-0.

It was 2-0 on 19 minutes, Swaby put Kirlew-Wright under pressure and the defender saw his back pass sliced into his own net by keeper Harris. Swaby’s deliveries were continuing to cause problems from Tooting, and from the next Harris just about got enough on the ball to divert it beyond Bert Lloyd and away to safety.

Everything Rovers did was working, and on 25 minutes Tanga picked the pocket of Nikolai Krokhin, found Halsey and his shot was well saved by Harris. Just after the half hour and Richards and Halsey combined to set up Kevin Diomande but his low shot was well gathered by the overworked Harris. Ten minutes before the interval and Tanga again robbed a defender close to the area before seeing his shot saved.

Tooting almost found a way back into the game five minutes before the break, a quick break from our corner ended up with Garrett-Douglas turning the ball behind for a corner. From the corner Krokhin really should have scored with a free header, but we survived the effort and took a 2-0 lead into half time.

The visitors had a very good shout for a penalty early in the second half, a great run and cross by Ako-Adjei was heading towards Anuur Ceesay, who went down under the challenge of Lloyd, but to Rovers relief the referee waved play on. Diomande picked up a booking on 53 minutes for hauling down the flying Eddie Mbango. The free kick was played short to Leevi Bassett but Rovers charged the ball down and cleared to safety.

Just before the hour and a effort from just inside the half by Kirlew-Wright, having spotted Endurance Johnson off his line, was comfortably gathered by the young keeper. Tanga dragged an effort wide for Rovers, after being picked out by the ever impressive Matt Surmon.

Ceesay volleyed an effort wide on 65 minutes and five minutes later the same player fired over the bar. Having had a slightly iffy spell, Rovers started to reassert their dominance, and following a great run by Swaby, Tanga was just unable to get a head on the ball. Rovers then made a double change with Matt Tanton and Javin Dougan repalcing Diomande and Halsey.

It was 3-0 on 72 minutes, a glorious ball out wide by Lyle found Tanga and he beat his man and fired low beyond Harris, despite the efforts of Jaiden Chang. Johnson saved a low drive by 16 wide of the left hand post on 75 minutes, and from the corner Hugo Atkinson made a superb block to stop any thoughts of a Tooting comeback.

Full time came with Rovers securing their first home win of the season, a first clean sheet since the opening day of the campaign (and that in the FA Cup), and more goals than in any previous home game.