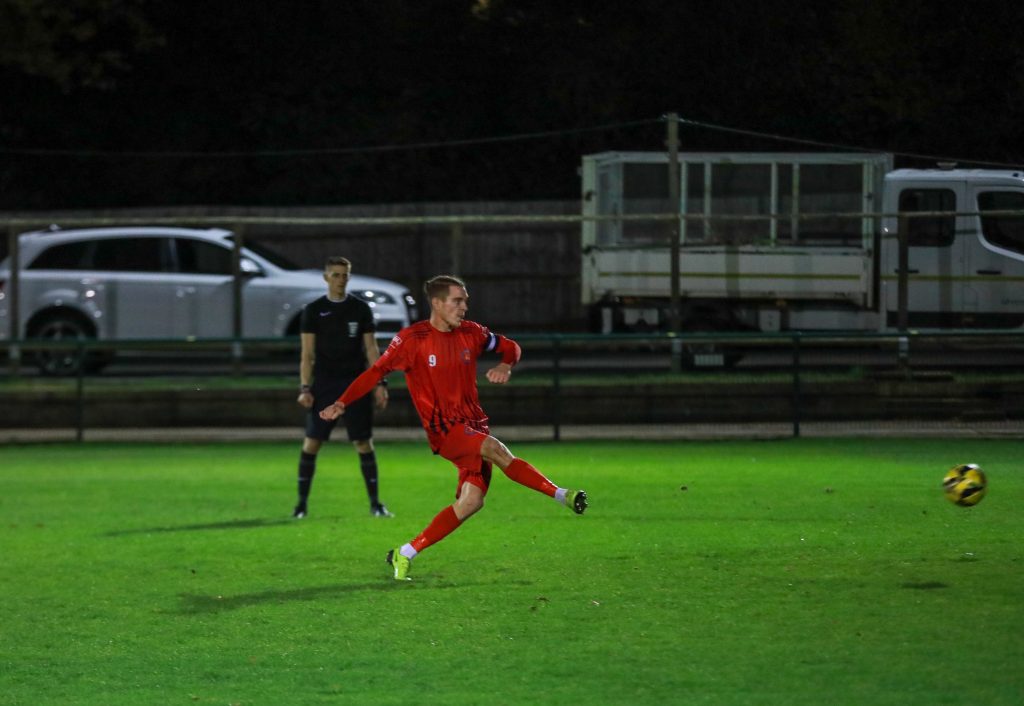 Rovers picked up a first ever Velocity Cup win on Tuesday night and progressed to the 3rd Round of the competition, thanks to a shoot out win over a pacey Three Bridges side.

Bridges started brightly, and after a couple of minutes Manny Tehe cut inside and saw his low shot comfortably saved by Purdue. Conner Collcutt then saw his effort go wide after a mistake in the heart of the Rovers defence. Bridges were holding the upper hand in the early stages and on six minutes, Collcutt fired another effort over the bar.

Our first chance came nine minutes in when a long Halsey throw was headed just over by Kevin Songolo, and from the goal kick Akmel forced the Bridges backline into a mistake and bought a good save out of Mitch Bromage. Tehe then superbly turned Rhamar Garrett-Douglas and bought another stop out of Purdue.

Halsey saw a point blank header bring a great save out of Bromage, and we continued to put the Bridges backline under pressure and took the lead on 18 minutes. Matt Surmon fed a delightful ball out to Javin Dougan who cut inside Joe Stone and unleashed a bullet beyond Bromage and into the top corner. Purdue then save well from a Collcutt shot from the edge of the area.

Uzor curled a free kick just over the bar on 24 minutes and Bridges should have levelled a minute later. Songolo left Ollie Creed short on a pass, and we were forced to concede a corner. From that Reagan Jeffrey fired narrowly over the bar. Bromage saved well from Songolo as both sides were keeping up the attacking intent. Collcutt went close with a free kick on 32 minutes bringing a decent stop out of Purdue.

Scores were level on 42 minutes. We survived a scare a minute before when Alex Kaye fired wide of the right hand post, having capitalised on a poor clearance by Purdue, but from the short corner a low drive by Conner Collcutt went through a crowd giving Purdue no chance and the sides went in level at the break.

Both sides had chances in the early stages of the second half, Akmel almost capitalised on a mistake by Bromage but could not get a shot away, and at the other end Purdue did really well to save a low strike by Collcutt. We retook the lead on 53 minutes with an absolute screamer by Surmon. Picking up the ball midway through the half he unleashed a fierce drive beyond Bromage for 2-1.

We almost increased our lead minutes later when Dougan looked to capitalise on a slip by Michael Wilson but eventually saw his effort saved by Bromage. Collcutt drifted passed a couple of defenders and fired just wide, and on 58 minutes the same player was denied by a good Purdue stop down to his right.

Kyron Richards replaced Uzor on the hour, and the scores were level on 63 minutes and it was another screamer, with Wilson curling a 25 yarder over Purdue. We made a couple of changes with about 20 minutes remaining, Akmel and Garrett-Douglas making way for Tyler Cox and Lee Flavin. Cox fired over from 12 yards and with ten minutes to go Tresor Difika deflected a Dougan effort wide.

We ended strongly and looked most likely to snatch a winner but were unable to find the back of the net, and it was off to penalties.

Wilson stepped up for Bridges and fired the first penalty beyond Purdue for 1-0, with Halsey responding for us. The excellent Collcutt send Purdue the wrong way for 2=1, and youngster Bobby Moore crashed his effort into the top corner for 2-2.

In conclusion, a fantastic game, three stunning goals, and a shoot out – a perfect nights entertainment.

We head off to Binfield in the 3rd Round.