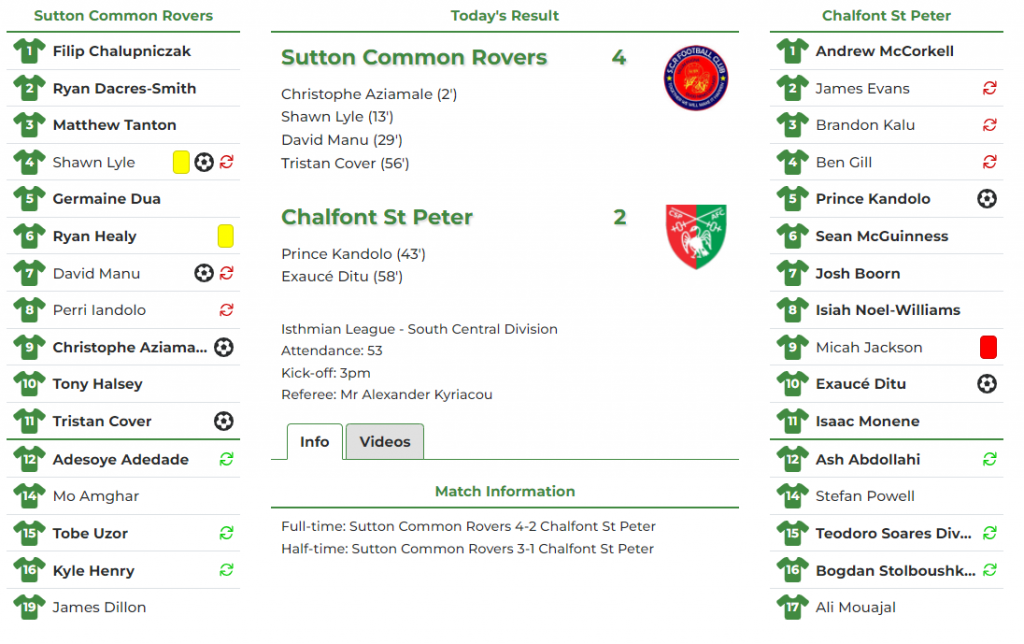 A blistering start helped the lads on their way to a vital win over fellow strugglers Chalfont St Peter, in a true relegation six pointer.

In previous years, must win games seem to follow the pattern of us falling behind early on, and being out of the game by midway through the first half. This time it was different.

Rovers were off to the perfect start, two minutes in and after Ryan Healy had been fouled, Filip Chalupniczak fired a deep free kick forward, Tony Halsey won the header and Christoph Aziamale beat Prince Kandolo and fired low beyond Andrew McCorkell to give Rovers a vital lead. Chalfont responded positively and should have levelled, Isiah Noel-William planting a free header from a corner wide of the left hand post.

A couple more corners followed before Rovers started to get back into the swing of things, and on 13 minutes it was 2-0. A barrage of huge Tony Halsey throws eventually led to a corner, Perri Iandolo swung it in, and Shawn Lyle rose unopposed to head home. Two minutes later and another corner caused chaos in the Chalfont area, with the visitors eventually forcing the ball clear.

Halsey fired over the bar from distance on 17 minutes, and after a mistake from Lyle, Chalfont’s Josh Boorn saw his low cross reach Isaac Monene but Chalupniczak was well positioned to make the save. Neat link up on 20 minutes between Tristan Cover and Lyle ended with a Lyle shot deflected behind for a corner, which came to nothing.

Another dangerous Iandolo corner ended with Halsey hitting the bar from close range with a header, back at the other end and a Chalfont corner was claimed by Chalupniczak. Halsey then saw a long throw deflected just wide of the right hand post. Cover and Lyle then both went close from the corner as Rovers looked to increase their lead.

It was 3-0 on the half hour, a long clearance by Chalupniczak was only half cleared, David Manu picked the ball up midway inside the Chalfont half, strolled forward and fired beyond McCorkell from 30 yards. Isiah Noel Williams had a shot from distance blocked by Germaine Dua.

Chalfont were back into the game shortly before the break. An innocuos looking challenge by Ryan Dacres-Smith on the right led to a free kick, and as Rovers failed to clear, Kandolo poked the ball home and a minutes later a shot from Boorn drifted just wide of the left hand post.

Ryan Healy fired an effort well wide early in the second half, and eight minutes in, a low Iandolo free kick was saved by McCorkell, who reacted superbly to gather the loose ball.

Rovers increased their lead on 56 minutes, Aziamale did well on the left, shrugged off a couple of challenges but saw his effort come back off the post. Fortunately for Rovers Tristan Cover was on hand to crash home the rebound.

Chalfont responded instantly, Monene got beyond Dua and although Rovers had bodies in the area, a his low cross was forced home by Exauce Ditu. Twenty five minutes into the half, and with Chalfont pushing again, Micah Jackson fired an effort high over the crossbar.

Cover saw a volley saved by McCorkell with 20 minutes remaining but play was generally bogged down in the middle of the park with no real threat to either goal.

Late on, and Chalfont were reduced to ten men, confusion in the Rovers area almost let in Jackson, but the ball was gathered by Chalupniczak and as play continued Jackson looked to stamp on Healy, and saw red.