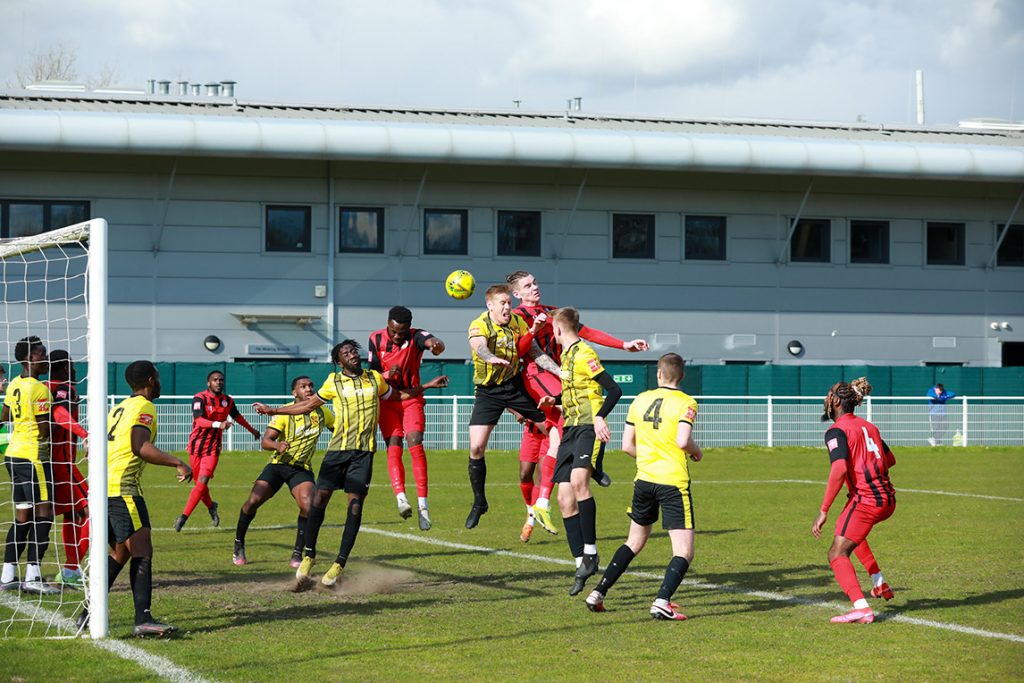 Rovers crashed to a disappointing 1-0 defeat away at fellow strugglers Westfield, in a low quality encounter on Saturday.

Darren Salmon was forced into one change from the side that had overcome Staines Town the week before, with Ryan Dacres-Smith back in the side in place of the injured Adesoye Adedade.

It was Westfield who started brightly, Filip Chalupniczak spilled a free kick which was bundled home by Luke Elliott but a raised flag stopped the home celebrations. Our first chance came on six minutes, Shawn Lyle found David Manu but his shot was comfortable for the young Westfield keeper Toby Fisher.

The game in blustery conditions and on a bobbly pitch was hugely short on quality with both sides struggling to get the ball down, and neckache was the order of the day for those watching on. Tristan Cover linked up well with Lyle and he saw his ball into Christophe Aziamale intercepted and a quick Westfield break saw Jacob Breckon find former SCR man Will Efambe, but Chalupniczak was out quickly to save.

IK Hill fired over the bar on 22 minutes as the hosts pushed for a breakthrough, and five minutes later a dangerous Perri Iandolo corner caused problems for Fisher, but the keeper was able to gather at the second attempt with no Rovers man able to force the ball home. Cover and Aziamle then set Iandolo away on the left, but having driven into the area he was unable to get a cross away and the chance went begging.

It was 1-0 on 37 minutes when Hill cut in from the left and drilled a low effort beyond Chalupniczak’s right hand to give Westfield the all important lead. Aziamale was denied by a great challenge by Luke Elliott as we looked for an instant response, and the sides went in with Westfield holding a slender lead at the break.

We started brightly in the second half, forcing a succession of corners but the home keeper and backline were dealing comfortably with anything thrown in at them. Efambe saw a low effort well held by Chalupniczak and on 55 minutes Troy Timothy went into the book for a poor challenge on Cover.

Tony Halsey bought a top save out of Fisher with a looping header that looked destined to bring the scores level. Kai Hamilton-Olise and Hill then broke quickly to set up Breckon but his curled effort drifted harmlessly over the crossbar.

Hill found Hamilton-Olise on 62 minutes, he cut inside but fired an effort high over the bar. We looked poised to equalise with fifteen minutes to go, Matt Tanton found Cover and his cross looked destined for Manu or substitute Ezekiel Bademosi, but both were just unable to get a decent contact on the ball.

Westfield should have sealed the game late on, but after a quick break, following a weird passage of play (we were flagged for offside, despite a defender being on the floor and playing Aziamale onside – referee blows whistle, realises error and awards goal kick – however ball had not gone out when he had blown and Westfield player had regained feet and shielded ball out – drop ball awarded, to us as we were the last team to touch the ball despite the Westfield player being in control and shielding it out – confused, yep me too. Fair play to the official Sean Jenkins for explaining afterwards exactly what had happened – still confused though! – blimey thats a long explanation).

Anyway, Westfield should have sealed it late on but Hamilton-Olise somehow dragged his effort wide from close range. It didn’t matter though and the hosts picked up a vital three points, and we were left still looking for points to take us to safety.